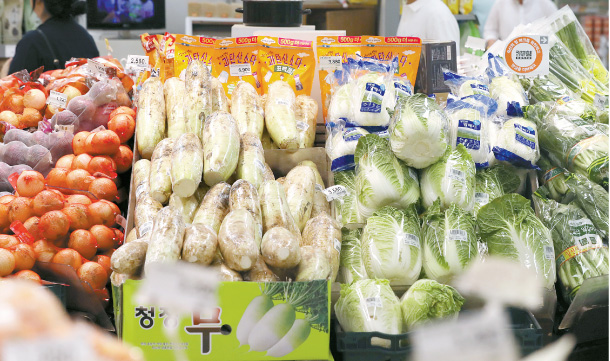 Prices for vegetable rose 3.7 percent in July compared to the previous month due to the continued heat wave according to Statistics Korea Wednesday. It said the inflation rate for vegetables was on a steady downslope between March and June, but rebounded in July. [YONHAP]

The government will dip into its emergency supply of vegetables in response to a spike in prices caused by the ongoing grueling heat wave.

Since some of the hardest hit items include radish and Napa cabbage, the main ingredients for kimchi, the government has been put on high alert.

The price of Napa cabbage rose 39 percent in July compared to the previous month, while that of radish jumped by 42.1 percent, according to Statistics Korea on Wednesday. Spinach also saw prices going up a whopping 50.1 percent compared to a month ago.

The Ministry of Economy and Finance held a meeting to discuss a set of measures aimed at increasing the supply of agricultural products. 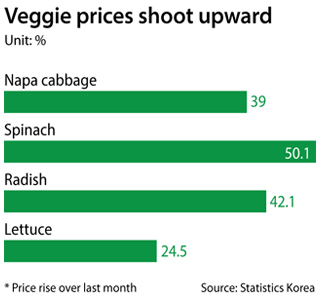 “The prices of cabbage and radish are susceptible to high temperatures,” the ministry said in a statement, “But they stayed at the same level as last year through mid-July and prices started spiking after the mid-July.”

The Ministry of Agriculture, Food and Rural Affairs has explained that crops such as Napa cabbage, which are mostly grown in the mountainous regions of Gangwon, are suffering from various diseases, such as bacterial soft rot, due to the excessive heat that followed the rains in late June and early July.

To solve the supply shortage, the Finance Ministry vowed to release 100-200 tons of Napa cabbage every day to contain the rising prices.

As for radish, the ministry is hoping to soon release supplies of the vegetable that were originally earmarked for mid-August.

Despite the steep rise in vegetable prices, consumer prices rose 1.5 percent in July, well below the central bank’s inflation target of 2 percent.

That brought up the long-standing problem of the discrepancy between headline numbers and the prices that people actually feel.

Hwang Soo-kyeong, chief of Statistics Korea, said that the statistics agency will revise the calculation metric of consumer prices to reduce the gap.

Still, Hwang said that there are always some differences between headline consumer prices and how people feel.

“It is possible to feel the disparity between statistical numbers and what people actually feel,” Hwang said. “People tend to be more sensitive to the price rises, which is not as much as for the decline.”

While the government scrambled to bring up measures to ease the prices of some products, research by the country’s central bank warned against excessive interference.

The report released Tuesday said that the intervention could distort markets while limiting the impact of monetary policy.