For K-pop streamers, V Live is the place to be

For K-pop streamers, V Live is the place to be 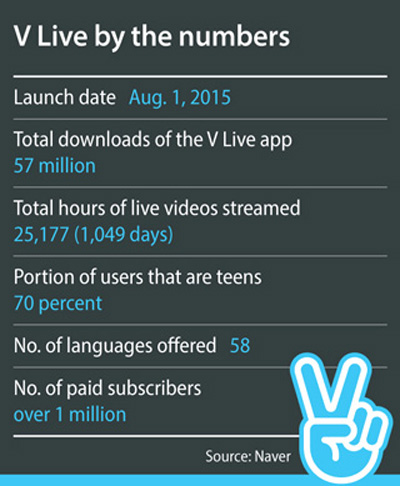 Among K-pop loving teens, V Live is the new YouTube.

The video streaming platform celebrated its third anniversary on Wednesday, and data released by its operator Naver show that V Live’s influence has grown immensely across the globe.

Those aged between 15 and 24 make up 79 percent of its global users, with teenagers a full 70 percent of that demographic. The V Live app has been downloaded 57 million times. The total hours of content live streamed through V Live amounted 25,177 hours, or 2.87 years.

What differentiates V Live from global video and live streaming service YouTube is that Naver’s service is centered on partnership with artists.

Ever since V Live launched, it has become customary for K-pop musicians to use the service to promote their new albums. Before and after staging shows, they chat with their fans live. The streaming platform works in a similar way to Instagram or Facebook Live. When the chats are over, the videos are uploaded so that others can watch them later.

With the rising popularity of video content, Naver has found a way to capitalize on V Live. In January of last year, it launched paid services. Viewers can pay for an exclusive live chat with a specific celebrity or subscribe to CH+, which is a premium subscription to channels run by different stars. CH+ users can follow specific entertainers such as BTS, Exo and Twice, and exclusively chat with their favorite celebrities. As of Wednesday, subscribers to the BTS channel on V Live, at 10,069,587, slightly outnumbered subscribers to BTS’ BangtanTV YouTube channel.

“Von Voyage,” a reality show series featuring BTS members, was the most popular program. More than 1 million users have paid for V Live content at least once.

“The V Live app, based on its unique technology and format, is one of the leading live entertainment platforms for communication between global stars and fans,” said Park Sun-young, leader of V Live’s service team. The company is gearing up to launch a music broadcasting channel and a music chart in Vietnam and is in the middle of developing what it says is more “experimental content.”