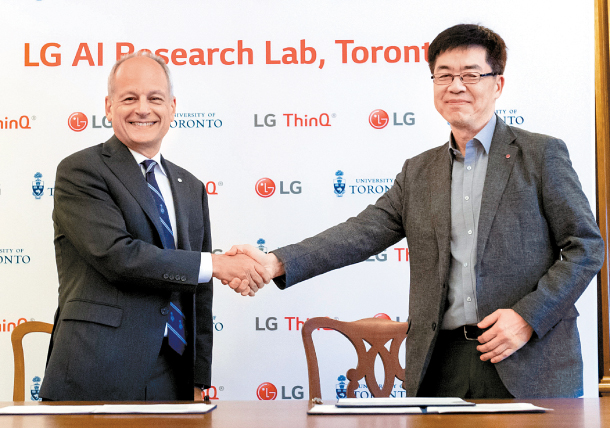 The focus of the research will be deep learning, fundamental technology for AI research and investment in or cooperation with local start-ups in AI will be “proactively” considered, LG said.

“AI will ultimately touch everybody’s lives, transforming the way we live, work and play,” said LG Electronics Chief Technology Officer Park Il-pyung. “Early implementations of AI in connected devices today are setting the stage for tomorrow’s smart cities, smart homes, smart businesses and smart devices, all with capabilities that no one has even dreamed of yet.”

Under a five-year, multi-million-dollar research partnership with the University of Toronto, LG aims to expand its AI ecosystem.

The research center in Toronto joins four existing think tanks under LG that are devoted to AI research - in Seoul, Silicon Valley, Bengaluru and Moscow - but is the first that is concentrating solely on AI.

LG has been building its AI ecosystem based on its signature ThinQ platform, and applied it to flagship smartphones and various home gadgets including refrigerators, washing machines and air conditioners. Robots are another area of interest and LG has invested heavily in robotics start-ups at home and abroad.

The University of Toronto already forged a partnership with LG’s rival, Samsung Electronics, opening an AI Center there in May. The tech giant tapped Sven Dickinson, a professor of computer science and a computer vision expert - exploring object recognition - to lead the lab.

The university is known for Geoffrey Hinton, a professor emeritus considered the “godfather” of deep learning. One of the most sought-after minds in Silicon Valley, Hinton has since 2013 been dividing his time between research at the school and working for Google after his company, DNNresearch, was acquired by the search engine.

Samsung and LG are part of a series of “deep-pocketed foreign multinationals” setting up AI research labs at the University of Toronto and hiring researchers from the school to run them, according to the university’s news site.

Some other global giants that have done so include Google, whose Toronto Brain lab is helmed by Hinton; Uber, whose self-driving car lab in Toronto is led by Prof. Raquel Urtasun; and Nvidia, led by Prof. Sanja Fidler, an expert in computer vision and applied machine learning.