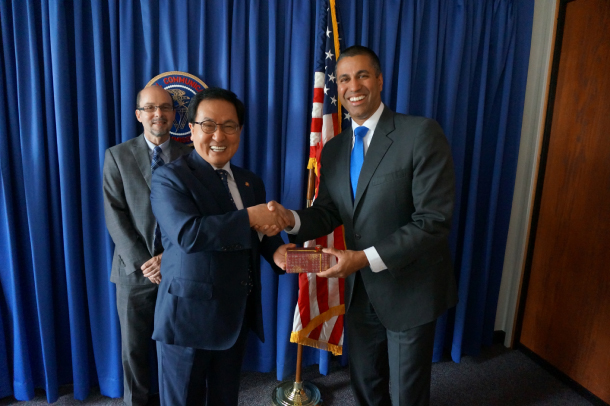 Minister of Science and ICT You Young-min, front left, shakes hands with Ajit Pai, chairman of Federal Communications Commission, after discussing cooperation on 5G development on Tuesday in Washington. [MINISTRY OF SCIENCE AND ICT]

Minister of Science and ICT You Young-min visited the United States on Tuesday to bolster cooperation in commercializing the next-generation 5G telecommunication technology and space development.

You met with Ajit Pai, chairman of the U.S. Federal Communications Commission, which is in charge of the country’s telecommunications regulations, and discussed how the two countries can cooperate in establishing high-speed 5G networks.

Korea plans to commercialize 5G networks by next March and the Science Ministry completed 5G frequency auctions in June. The FCC is preparing for 28 gigahertz (GHz) and 24GHz spectrum auctions scheduled for November.

The Korean ministry said Pai showed great interest in the completed auction and asked for Korea’s support in expanding the use of 28GHz spectrum for 5G services.

While You asked about effects of ditching net neutrality in the U.S., Pai said there have been positive changes such as increased investment in telecommunications infrastructure and few side effects, according to the Science Ministry.

Rules put in place by the Obama administration in 2015 prohibited telecommunications companies like AT&T and Comcast from limiting connections to certain websites or charging extra for higher-quality streaming, which was called net neutrality.

While Pai has been blunt in his view that lifting restrictions would give incentives to broadband companies to upgrade networks and ultimately benefit consumers, content providers like Amazon, Google and Netflix were strongly against abandoning the rule, claiming it would allow telecommunications companies to play favorites and limit innovation by smaller start-ups using the internet.

Korean internet service providers, content providers and the government have been discussing net neutrality after the Trump administration scrapped the rule last year.

You suggested Pace create a win-win alliance between the two countries in space development based on an agreement signed in 2016 to cooperate in the exploration and use of airspace during the second Republic of Korea-U.S. Civil Space Dialogue.

The third R.O.K-U.S. Civil Space Dialogue, a meeting between high-ranking government officials to discuss space development, will be held in the first half of next year in the U.S.