CEO laments wage increase: ‘We will eventually all die’

CEO laments wage increase: ‘We will eventually all die’ 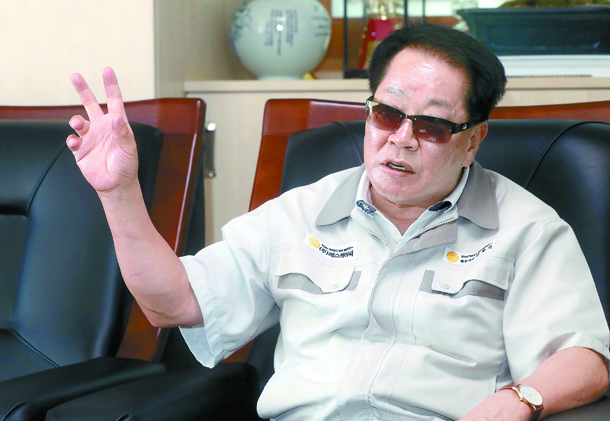 The sunglasses Shin Jung-gi, the CEO and founder of SKC, wore at the Sihwa Industrial Complex in Siheung, Gyeonggi, could not hide his dispirited face.

SKC is a small industrial plating company that sells radiator grills, automotive emblems and hubcaps to domestic and overseas car manufacturing companies. When Shin was 30 years old, he borrowed 20 million won ($17,833) to start his own business. He took over the company he used to work at when it went bankrupt.

Now, SKC is regarded as having some of the best technology in its field, but Shin is still fraught with worry. “Things have been rough recently. I can’t sleep because I’m worried,” he said. “I’ve dedicated my life to this company, but I don’t know if I can carry it forward.” To figure out why the head of a successful small business is struggling, the JoongAng Ilbo sat down for an interview with Shin.

Q. Why are you having such a hard time? Is it because of the sudden increase in minimum wage?

A. Our factories employ a lot of workers who package and send car emblems, hubcaps, grills and other automotive parts. There are around 150 to 160 workers, and 80 of them are foreigners. Eighty percent of the workers who do menial labor are paid the minimum wage.
When the minimum wage rose by 16.4 percent, it increased our monthly labor costs by 48 million won. That’s around 600 million won a year. There are many factors that hurt management, such as exchange rate fluctuations and rising raw material prices. In particular, the U.S. Trump administration says it will impose a 25 percent tariff on imported cars. Work has already decreased by 20 percent. Our hands are tied, and if this situation continues, we will eventually all die.

Are you saying labor costs too much?

Workers who package goods are paid around 3.2 million won a month. They work 12 hours a day over two shifts. Naturally, if labor costs increase, production costs should increase, but it’s hard to raise the price of the products. Competition is too fierce.

Won’t you be more burdened if the minimum wage increases by 10.9 percent next year?

Let’s talk about the plating industry. It is better off than many other industries, but it is mostly comprised of small businesses. Usually, the father manages the company, the mother packages them, the daughter does the finances and the son delivers. Because of the many expenses, like rent and waste management, the CEO can’t even take his share. I don’t object to raising the minimum wage, but it’s rising too fast. If the minimum wage continues to go up, in two to three years, 50 percent of the plating companies will go bankrupt. Can’t we raise it more steadily?

Hasn’t the Korea Federation of Small and Medium-sized Enterprises (SME) submitted a letter to the Minister of Employment and Labor objecting to the minimum wage increase?

We tried, but I don’t know how successful our appeal will be. The Korea Federation of SMEs said that the minimum wage should be applied differently to different types of businesses, and demanded a re-examination of the letter. In Japan, the minimum wage differs by region and the type of work. Japan raises the minimum wage by about 3 percent each year. Labor and management there talk things out to understand and compromise, while Korean industries are fighting for their lives. Conversations go nowhere here.

What do you think will happen if the appeal is unsuccessful?

Many companies in the industry will either shut down or operate illegally. On my recent business trip to China, I saw that its technology is right behind ours. They have brought in technology from Germany. It is only a matter of time before China overtakes Korea if the burden of wages grows. We need to be alert about the crisis we’re currently facing.

Are you considering closing your company?

My dream is to make the world’s best factory. I was shocked when I visited a factory in Japan not long after I first established my company. At that time, my factories manufactured products by hand, but that Japanese factory was automated. That’s when I decided to build a factory that would surpass Japan’s technology and be the world’s best. I almost caught up, but things suddenly became hard. Most of our company’s executives are founding members and we have been working toward the same dream, but now we have to give it up. It’s heartbreaking. We’ve invested in factories for such a long time, but due to reduced work and the sharp rise in minimum wage, overall costs rose significantly. Under these circumstances, which founder would want to hand over a company to his children?

From now on, we have no choice but to automate rather than hire workers. In 2016, I invested 20 billion won from loans and scraping together money and moved to the Sihwa Industrial Complex. Come to think of it now, I should have taken care of things then. I am planning to close two factories in Ansan, Gyeonggi. I will try to automate more, but if it doesn’t work, I’ll just have to reduce production.

I’m worried about what will happen next, but the sky has never fallen before, so I need to try my best to save the company.