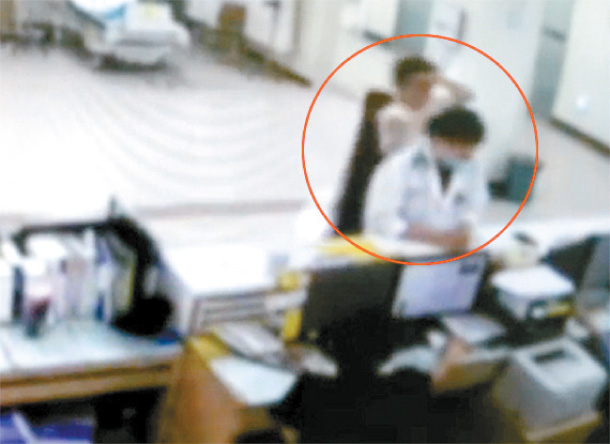 Surveillance footage shows a drunken man about to hit a medical intern at the CHA Medical Center in Gumi, North Gyeongsang, on Tuesday. [KOREAN MEDICAL ASSOCIATION]

Another incident of violence against medical staff at a hospital in Gumi, North Gyeongsang, on Tuesday has fueled concerns about the vulnerability of medical workers to unwarranted threats by unhinged patients.

Security footage from the CHA Medical Center in Gumi shows a drunken man in his 20s smashing a metal tray on the head of a medical intern at 4 a.m. The intern suffered a ruptured artery in his crown and has to undergo over three weeks of treatment, the hospital said.

This is the second case in the same month in which medical workers have suffered violence at the hands of patients. On July 1, a man in his 40s assaulted a doctor in the emergency room of a hospital in Iksan, North Jeolla.

According to the CHA Medical Center in Gumi, the drunken man was already incapable of self-control when he was brought into the hospital after being beaten by a schoolmate with whom he was drinking.

The hospital said the man took off his shirt and spat on the floor in a fit of rage. The medical intern, surnamed Kim, gave the man emergency treatment and turned around to fill out a medical form when he was hit on the head with a metal tray.

“Kim’s artery on the top of his head burst,” said Choi Seung-pil, the hospital’s emergency center director. “The floor was immediately covered in blood and the emergency room fell into pandemonium.”

Kim had suffered blood loss and a concussion and was hospitalized after saying he felt dizzy. The drunken man then tried to hit another patient, but police officers arrived on the scene and detained him. Choi believes another person could have gotten hurt if the police had not arrived then. He demanded the man receive harsh criminal punishment for his actions. The incident caused other patients in the emergency room to wait over an hour for treatment because of the chaos that ensued, Choi said.

Medical workers are constantly exposed to such forms of violence, according to a recent report by the Ministry of Health and Welfare. The report said that last year there were 893 cases of violence, equipment damage and verbal assaults in emergency rooms nationwide. This amounts to an average of 74 incidents a month. The data came from a government probe into obstruction of treatment at medical facilities across the country.

The most cases occurred in Gyeonggi (198), followed by Seoul (105) and South Gyeongsang (98). Most of the cases (365) involved physical violence, but there were many others that involved verbal abuse, threats or sexual harassment.

The majority of victims were nurses (387 cases), followed by doctors (254 cases). Security personnel and emergency workers were also harmed. The vast majority of perpetrators were patients (737 cases), but in some incidents they were patients’ family members (139 cases).

A hefty portion of the cases, two out of three, involved alcohol intoxication. In most of these incidents, perpetrators were not legally punished, and no further investigation followed.

“Violence and threats against medical workers can lead to obstruction of treatment and may threaten the lives of other patients,” said Rep. Kim Seung-hee, who received the report from the Health Ministry on Tuesday. “There needs to be an institutionalized method to protect both emergency medical workers and patients.”

The Korean Medical Association, the largest private association of medical workers in the country, demanded the government take measures to deal with violence against medical personnel. It said in a statement on Tuesday that efforts by the medical community to deal with the issue have proven insufficient.