Hwang Ui-jo proves his worth with 14th goal

Hwang Ui-jo proves his worth with 14th goal

Hwang Ui-jo of Gamba Osaka proved that his addition to the Korean national football team for the 2018 Asian Games wasn’t a fluke as he scored his 14th goal of the Japanese J1 League season during a match against Jubilo Iwata at Yamaha Stadium in Iwata City, Shizuoka Prefecture, on Wednesday. 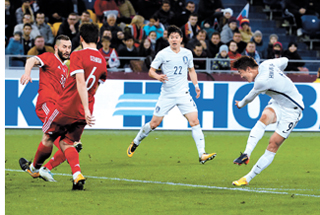 Hwang Ui-jo of Gamba Osaka, right, takes a shot during Korea’s friendly match against Russia at VEB Arena in Moscow on Oct. 8 of last year. [YONHAP]

When the two teams were tied at 0-0, Hwang, who played as Gamba Osaka’s front striker, broke the tie in the 82 minute with a half volley into the goal. Hwang has scored six goals in his last six matches.

Despite Hwang’s goal, Gamba Osaka had to walk away with a 1-1 draw as Kentaro Oi of Jubilo Iwata scored an equalizer in stoppage time.

Hwang was one of the Korean U-23 national team head coach’s Kim Hak-bum’s three over-23 selections, along with Son Heung-min of Tottenham Hotspur and Jo Hyeon-woo of Daegu FC, for the upcoming Asiad.

As Hwang failed to make it onto the national team for the 2018 FIFA World Cup, Kim’s selection caused controversy over whether Hwang was added due to personal connections.

Aside from not competing at the World Cup, many believed that adding Hwang was pointless as Kim already selected Son as an over-23 striker.

“I excluded all external matters like personal relationships and chose players only based on their skill level,” Kim said. “Since Son Heung-min, Hwang Hee-chan [of Red Bull Salzburg], Lee Seung-woo [of Hellas Verona] and other strikers in the foreign leagues are having difficulties joining the team early, we needed an experienced striker who has the ability to lead our team’s offense in the beginning.”

Despite Kim’s explanation for why he selected Hwang, fans have heavily criticized both Kim and the striker.

Hwang has kept himself quiet and focused on playing football, and he’s proved himself with his recent strong streak.

This season, Hwang’s club Gamba Osaka had been struggling to score in league matches.

“[Hwang] Ui-jo is a striker with many strengths,” said Oh Jae-suk, Hwang’s teammate at Gamba Osaka. “He’s a style of player who runs a lot, and he focuses a lot more [than any other players] when he’s given a chance to score. After he got added to the Asian Games team, he quit surfing the web, has only been thinking about football and is hoping to help the team.”