Demolished in December, sculpture is set to return

Demolished in December, sculpture is set to return 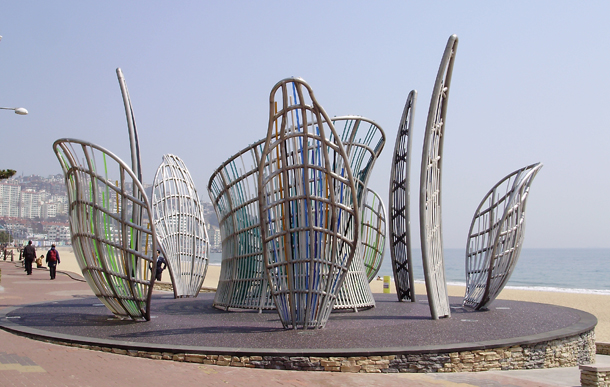 Dennis Oppenheim’s “Chamber” was built in 2011 near Haeundae Beach and taken down in December last year due to corrosion. [BUSAN BIENNALE ORGANIZING COMMITTEE]

American artist Dennis Oppenheim’s work “Chamber” was built in 2011 - and demolished in 2017. Disassembled, discarded and destroyed, the acclaimed artist’s sculpture was thrown away as industrial waste last December, the records of its existence remaining only in text and photographs online.

Fortunately, what could have ended up a global-scale intellectual property lawsuit has been settled peacefully, and a new “Chamber” will be built at the end of the year, once again in Busan.

Busan’s Haeundae District revealed on Tuesday that its city council passed a supplementary budget for the second half of 2018, which includes a total of 500 million won ($443,689) assigned to reinstalling Oppenheim’s work. The district government will work with the Busan Biennale Organizing Committee for creating the work, and have it installed in the APEC Naru Park in southern Haeundae District, near Bexco.

“We are happy to be able to carry out the wishes of the [Oppenheim] family,” said an official from the district office.

After the Busan Ilbo first reported the news in January, the head of the district office, Baek Sun-gi, flew to the United States to meet with Amy Oppenheim, the wife of the late artist, in February to apologize for their misdeed.

“We offer a sincere apology to the family [of the artist] and the citizens [of Busan] for taking down Oppenheim’s ‘Chamber’ without notifying the family,” said Baek in a formal apology in February.

The sculpture was taken down between Dec. 11 to 17 last year without the district office informing either the Busan Biennale or the artist’s family. It wasn’t until the Busan Ilbo reported the incident in a report that the parties were notified.

According to the district officers, the sculpture had been corroded due to sea winds and storms that hit the shores of Busan. At the time, the district office “saw no artistic value” in the damaged work, citing it as the reason for the demolition.

The new “Chamber” will be placed inside a park, in contrast to the location of its previous version, which stood next to Haeundae Beach. The placement is intended to prevent the new installation from getting worn like its predecessor due to the salty sea wind.

The new version will take the exact shape of the initial design - nine metal petals standing 8.5 meters (27.8 feet) by 8 meters, 6 meters tall allowing for visitors to walk in between each petals. The piece is Oppenheim’s posthumous work as he passed away in January 2011 before the work was completed two months later.