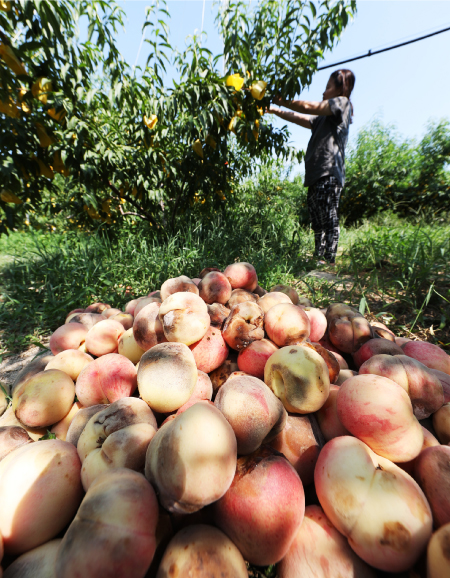 Peaches damaged by the intense heat are piled at a farm in Icheon, Gyeonggi, on Thursday. The recent heat wave, which has caused the highest temperatures recorded in Korea in more than a century, is having a major impact on local agriculture. [YONHAP]

Moon Young-joo, a 65-year-old farmer from Bonghwa County, North Gyeongsang, has been on his feet night and day trying to keep his animals and crops alive during the recent heat wave.

“None of my animals died yet, but most of my crops are completely dried out because of the heat and the lack of rain,” Moon said, who is raising about 50 cows along with crops such as corn and ginger. “I think this may turn out to be the worst year in my 20 years of farming.”

Korea’s temperatures have reached record highs this week, with the mercury rising to over 40 degrees Celsius (104 degrees Fahrenheit) in Hoengseong County, Gangwon. The temperatures are taking a heavy toll on local farmers and the agricultural industry.

The Ministry of Agriculture, Food and Rural Affairs reported on Thursday that six farmers have died due to the recent heat wave as of Wednesday. So far, the total number of deaths due to the heat stands at 29, according to the Korea Centers for Disease Control and Prevention.

Out of the 2,355 people who fell ill because of the heat, 210 were either farmers or fishermen, the Agriculture Ministry said.

“Most farmers [in Korea] are elderly,” said Oh Byeong-seok, director general at the rural policy bureau of the Agriculture Ministry. “They also work in settings where they are exposed to high temperatures, such as ride paddies, gardens and greenhouses, which make them especially vulnerable to the recent heat wave.”

It is not just the farmers falling victim to the heat.

As of Thursday, over three million animals, including 16,000 pigs and 3.2 million chickens, have died due to the drastic spike in temperatures. In just a week, more than one million animals have died. As of last Thursday, the number of animal casualties stands at two million.

The government decided to deploy a response team in August to monitor the situation and prevent farmers and animals from getting sick.

It is also set to send out medical teams and is mulling whether to deploy the military to some rural areas to help farmers cope with the unprecedented heat.

Normally, the Korean military is mobilized during the harvest season in the fall, when farms are short-handed.

“We will discuss the possibility of mobilizing the military [to help farmers with the heat wave], which was never done before,” Oh said.