For parental leave, bigger companies do much better

For parental leave, bigger companies do much better 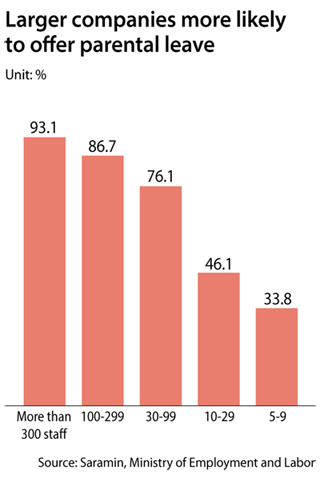 While the government is pushing efforts to expand parental leave, the number of fathers using this system remains low and differs greatly depending on the size of the company they work for, according to an analysis of government data released on Thursday.

According to jobs portal Saramin’s analysis of government statistics, 90,123 workers took parental leave last year, a 29.5 percent increase over 2013. The number of men taking parental leave also reached the meaningful threshold of 10,000 for the first time last year, but compared to maternal leaves, their share remained small. Among all the workers who took parental leave, only 13.4 percent were fathers.

Korean law says that any worker can request parental leave, but in reality, many workers don’t take it for fear of facing disadvantages at work.

Statistics from the Labor Ministry also showed that employee’s parental leave situation differs greatly depending on company size. Of companies with more than 300 employees, 93.1 percent encouraged their employees to take parental leave.

To better understand circumstances at companies with less than 300 employees, Saramin conducted a survey on human resource managers at 232 smaller firms.

Only 47 percent of them said that their company’s female workers take maternity leaves, meaning at more than half of those companies, women were not taking advantage of the policy. As government statistics suggest, men hesitate even more: 90.9 percent of the respondents said no male workers has ever taken a paternity leave. On why it was more difficult for smaller companies to encourage staff to go on parental leaves, 62.1 percent of human resource managers said it was because it is difficult to find workers to fill the gap.

“Reducing the burden of child care for employees is an important task to bring balance between work and family in this society,” said Lim Min-wook, a PR team head at Saramin.