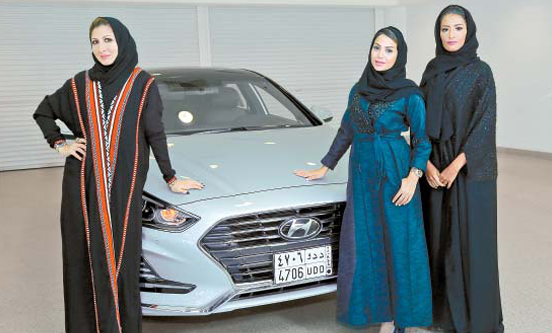 Saudi women pose with a Hyundai car as the Korean automaker begins a marketing campaign for Saudi women, who have recently earned the right to drive. [HYUNDAI MOTOR]

The company’s #WhatsNext promotional video centered on female empowerment shows working women of various fields in Saudi Arabia, which lifted the restriction on women on June 24.

Hyundai has also prepared various programs targeting female drivers in the Middle Eastern country, the company said. It opened a digital showroom at a shopping mall in the capital of Riyadh and said female staff will greet visitors and help them experience its vehicles.

The company plans to open similar showrooms in other major cities in Saudi Arabia down the road. One localized feature will be an alarm system that can notify women when their traditional garment, the abaya, gets stuck in doors.

“We will make various efforts to support women of the millennial generation, including those from Saudi Arabia, who are becoming major consumers around the globe,” the company said in a statement.

Hyundai Motor currently operates in 14 countries in the Middle East and generally focuses on selling the Accent, Elantra and Sonata there. Female drivers in Saudi Arabia have been cited as a major opportunity for automakers, which have seen the global market undergoing slow growth.