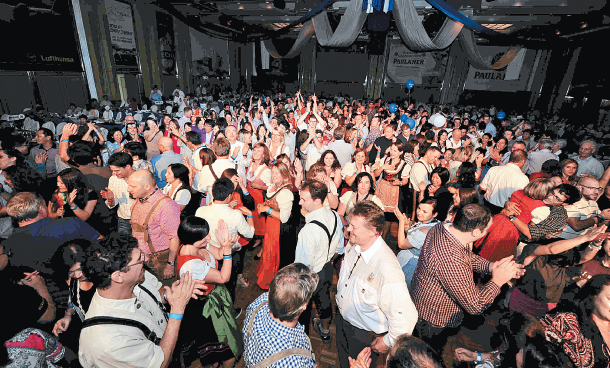 The Grand Hilton Seoul will celebrate the largest beer festival in the world, Munich’s Oktoberfest, here in Seoul on Saturday, Sept. 8 for one evening only.

First launched in 2007, the Grand Hilton Seoul’s Oktoberfest celebration has now become the hotel’s signature festival. It has repeatedly received positive feedback and has attracted more than 1,000 visitors every year thanks to its festive atmosphere and traditional German cuisine.

The festival will begin with a lively performance from Germany’s Anton Band, who were invited specially from Munich. The staff will greet guests dressed in traditional German clothes, and decorations at the hotel will remind visitors of Munich. Various games will be held, such as fast beer-drinking, nail hammering and arm wrestling. A lucky draw event will further enhance the festive atmosphere with impressive prizes, including round-trip Lufthansa airline tickets to Germany.

Guests can also enjoy unlimited draft beer from Germany’s best brewery Ayinger, which will introduce the Ayinger Oktoberfest-Marzen and Ayinger Brauweisse, which cannot be easily found in Korea. Ayinger Oktoberfest-Marzen is a seasonal beer produced specially for Munich’s Oktoberfest. As it is not yet officially imported to Korea, this special beer can only be enjoyed on this day. The Grand Hilton’s experienced chefs will also prepare a wide variety of traditional German dishes that will be available in an all-you-can-eat buffet.

Tickets are 150,000 won ($133). The event will take place on Saturday Sept. 8 starting at 6 p.m. on the fourth floor of the Convention Hall in the Hotel Convention Center. More details can be found on the Grand Hilton Seoul official homepage (www.grandhiltonseoul.com) or via email at oktoberfest@grandhilton.co.kr or phone at 02-2287-7456.