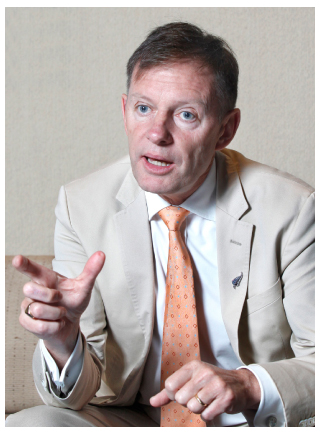 Turner began his post in April, in the midst of a detente on the peninsula when the South and North Korean leaders were meeting for their first summit in over a decade. The geopolitical machinations have dominated headlines, but the cultural shifts in Seoul and other South Korean cities on the issues of women’s rights and LGBT rights have equally fascinated Turner.

“Korea is changing,” Turner said, “and you’re seeing a lot more understanding of diversity and the value diversity can bring to society.”

Turner is the first openly gay ambassador to Korea. In July, he and his partner, Hiroshi Ikeda, attended the pride parade in Seoul. It was their first encounter with Korea’s cultural divide over LGBT rights.

“As we went on the parade, we could see the counter protests that were surrounding the park,” Turner said, “and that’s unusual. I haven’t seen counter protests like that in other countries.”

The ambassador took it as an opportunity to understand the country better. “We respect that people have different views,” he said, “and one of the great things about Korean society is that people are able to express different views.”

New Zealand participated in the queer festival this year along with a handful of other embassies. In recent years, the number of people attending the march has grown exponentially, reaching an estimated 60,000 this year.

Turner sees a similar sea change with the recent women’s protests in Seoul. Last month, tens of thousands of women staged rallies every weekend to protest the illegal use of hidden cameras, which have been found in public bathrooms, shower stalls and even motels. They have also called for the decriminalization of abortion in Korea.

“One thing I love about the Korean people is that they are so passionate,” Turner said. “You know what a Korean person is thinking pretty quickly. It makes for a very vibrant society.”

For Turner, witnessing the country’s growing women’s rights movement is exciting. New Zealand was the first country to give women the vote, according to the ambassador, “and we have a long tradition of very strong women leaders in New Zealand,” he said. The current prime minister, Jacinda Ardern, gave birth to her first child, a girl, in June. She was the second head of government to give birth while in office.

At the Grand Hyatt in central Seoul on Wednesday, Turner spoke to members of the New Zealand Chamber of Commerce about his mission and vision for bilateral relations. The ambassador told the Korea JoongAng Daily that relations will hinge on shared values between the two countries.

“On the security front, we face major challenges around ensuring the peace of this peninsula,” he said, “and on the trade front, we are now confronted with, some would say, existential threats to the system of multilateral rules and institutions which has underpinned the growth of world trade since World War II.”

Korea and New Zealand, the ambassador said, share a set of values that include respect for rule of law, international institutions, transparency, open markets, human rights, social justice, fairness and diversity. “We need those values now more than ever,” he said.

During his next three years in Seoul, Turner hopes to see progress in bilateral trade as well as Korean investment in infrastructure and housing in New Zealand. The free trade agreement that the two countries signed in 2015 seeks to eliminate most tariffs on New Zealand exports by 2030. Major items include metals, plastic, forestry products, dairy, beef, lamb and of course, kiwi. Korean exports to New Zealand include refined oil, cars, electronics and machinery.

“Two-way goods trade grew an impressive 17 percent in the year to June 2018, surpassing 4 billion New Zealand dollars [$2.7 billion] for the first time,” Turner said. “If there is one gap in the relationship, it is probably investment. There are huge opportunities in particular in hotels, infrastructure, transport and housing in New Zealand. New Zealand’s visitor arrivals are expected to grow over 30 percent in the next five years, creating the need for hotel infrastructure and new air routes. I hope to see Korea play an increasing role in this story.”

Turner added that he hopes more Koreans will see New Zealand as a high-tech innovation hub.

“The tech and innovation sector represents a third of New Zealand’s global export earnings,” he said, “and Korea - its K-pop, anime, film and high technology - are leading a wave of enthusiasm for Korean popular culture in New Zealand.”

He noted that the two countries recently cooperated on a film, “The Meg.” “It was filmed at the Kumeu Film Studios, which was built in Auckland in partnership with Warner Bros. Pictures and Gravity Pictures and owned by a Korean family,” he said. “It’s a 27-hectare facility with two water tanks. The movie opens here in two weeks. I wouldn’t miss it.”

Though his tenure here began with a detente in inter-Korean relations, the ambassador emphasized that the priority when it comes to North Korea is denuclearization before normalization of relations.

“I can’t be accredited to North Korea from here in Seoul, and no New Zealand ambassador has visited Pyongyang since 2014 because we are not prepared to have a formal diplomatic contact until North Korea makes concrete steps toward denuclearization,” he said. “There is a DPRK ambassador in Indonesia who is accredited to Wellington but is not allowed to visit New Zealand since 2014 for the same reason.” DPRK is the acronym for North Korea’s official name, the Democratic People’s Republic of Korea.

“New Zealand strongly supports the process that is underway, for peace and stability on the Korean Peninsula,” he said. “But we believe that it is very important to maintain the sanctions under the UN. We’re working with partners around the Pacific Islands, for example, to ensure that sanctions are being fully enforced. I think we would all like to see normalization of relations between the North and the South, but the priority goal remains denuclearization.”