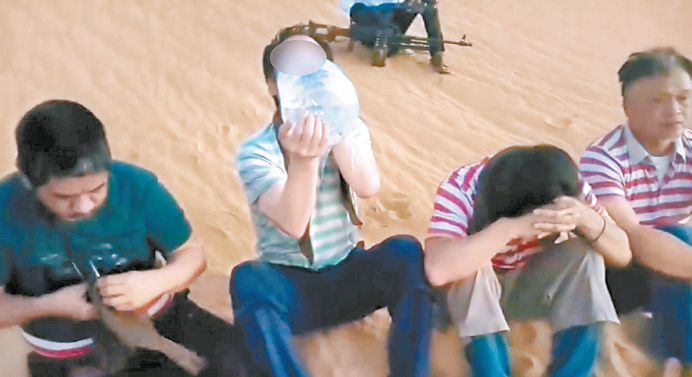 A screen grab from a video footage on the Facebook account of a Libyan media outlet, 218 News, Wednesday shows a Korean hostage drinking water in Jabal Hasouna, western Libya. [YONHAP]

President Moon Jae-in ordered the use of Korea’s “utmost abilities” and resources to rescue a Korean citizen who has been held by unidentified armed militants in Libya for nearly a month, according to the Blue House Thursday. Three Philippine nationals are also being held.

An anti-piracy unit operating in the Gulf of Aden, which is on a 4,400-ton Korean Navy destroyer, has been deployed to North African waters to lend support.

On July 6, an unidentified armed group entered lodgings for foreign workers at a local water management plant in Jabal Hasouna, western Libya, and abducted the Korean and three Filipinos. They took off with goods as well. A video clip of the hostages was circulated on Facebook on Wednesday, and the Korean Ministry of Foreign Affairs officially confirmed later that day that a Korean national was among the four men held in Libya.

On Wednesday, a two minute 40 second video of the four hostages, filmed taking turns imploring for help from their respective countries, was posted on Facebook by a Libyan media outlet. The hostages were sitting in an unidentified desert location while a masked man, apparently armed, stood guard in the background.

A man, who said he was Korean, said in English, “Please help me, president, please, our country, South Korea.” He spoke of “too much suffering” and referred to “problems,” and said his wife and children “has too much headache everyday regarding me.”

The three other men identified themselves as Filipinos and made similar pleas to their government. One man said he has a six-year-old child while another man said he was “afraid.” The men were seen taking turns drinking water from a canteen, but claimed they did not have food or medicine and were in poor health.

The Korean victim is reported to be a long-term resident of Libya.

In answer to the hostage’s plea, Kim Eui-kyeom, the presidential spokesman, said Thursday, “Our government, since the incident took place, has closely cooperated with the Libyan and Philippine governments, as well as the United States and other friendly countries, for their safe return.”

Kim added that the hostage “has not been forgotten by the country and president” and that Moon, from the first day of the kidnapping, ordered the use of “all the abilities of the country to do its utmost for the rescue” of the victim.

The Korean Navy’s anti-piracy Cheonghae Unit, which has been operating in the Gulf of Aden, had been immediately deployed to Libyan waters, according to the Blue House. The unit, best known for the 2011 Operation Dawn mission, in which the Korean Navy rescued a Korean tanker hijacked by Somali pirates, is expected to be on standby to provide any necessary support. Its warship is named Munmu the Great. The Philippine Department of Foreign Affairs said it had confirmed with its embassy in Tripoli that the three men in the video were Filipino technicians.

While the Korean government has been aware of the kidnapping since it took place and has been working to secure the Korean hostage’s release, it has requested local media to refrain from reporting on the abduction, which could endanger the victim. The situation changed following the release of the video footage of the hostages Wednesday, and the news embargo was lifted.

A Korean Foreign Ministry official said that the armed group has not revealed its identity nor revealed the reason for the kidnapping.

The Korean government by principle does not directly negotiate with such abductors, but a Foreign Ministry official said it is cooperating with the Libyan government and related agencies to secure the safe release of the Korean hostage.