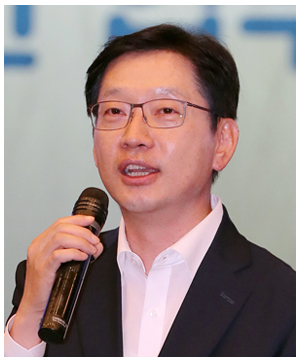 A special counsel investigating a political influence campaign during last year’s presidential election came up empty-handed on Thursday after raiding the office and residence of South Gyeongsang Gov. Kim Kyoung-soo, who is at the center of the scandal.

Computer hard drives used by Kim and his aides while he was serving as a lawmaker before being elected governor in June were retrieved during the raid, investigators said. What they found was less than encouraging. The hard drives were already formatted, and all the data in them appeared to have been wiped, prosecutors said.

Investigators were searching for evidence that could link the governor to Kim Dong-won, a blogger known as Druking accused of masterminding an illicit online campaign to support President Moon Jae-in during last year’s election. The blogger and his associates posted comments on social media that were favorable toward Moon and used software to artificially inflate the number of “likes” on those comments.

At the time, Kim Kyoung-soo was serving as a key aide to Moon. The independent counsel believes he may have had contact with the blogger and coordinated the political influence campaign with Kim Dong-won.

On Wednesday, the special counsel said Kim Kyoung-soo might have also sought Kim Dong-won’s help during his run for governor in June. With this new allegation, the counsel appears to have its crosshairs on Kim Kyoung-soo. Before the raid on Thursday morning, the counsel officially changed his status from witness to suspect.

The governor was not present when investigators stormed his office at the South Gyeongsang Provincial Office in Changwon - he had taken the day off from work. He was also not present at his official residence when the special counsel raided it the same day.

But with nothing to show from the raid, the independent counsel’s legitimacy is eroding, especially after its earlier pursuit of a Druking-associated lawyer ended in tragedy.

The lawyer was accused of giving money to Rep. Roh Hoe-chan, an influential figure in Korea’s progressive circle. As the counsel was investigating the lawyer, Roh took his own life on July 23 and admitted in a suicide note that he had taken money from Kim Dong-won and his group, though he said they received no favors from it.

A spokesman from the Secretariat of the National Assembly said computer hard drives used by lawmakers and their staff are customarily cleared of all data to avoid information leaks once they leave the legislature. “The same procedures were taken for Kim’s computers,” the spokesman said.

The special type of formatting used to delete the data, known as RAW, is permanent and possibly irreversible. “Recovering data from a hard drive formatted into RAW is impossible with current technology,” Lee Sang-jin, a professor of digital forensics at Korea University, said.

The raid may have come too late to yield additional evidence, according to analysts, given the likelihood that Kim Kyoung-soo had ample time to purge any data in his possession that might connect him to Kim Dong-won.

Prosecutors had originally planned the raid for July 30, but the Seoul Central District Court turned down their request for a warrant citing lack of evidence implicating the governor. Thursday’s raid came after the special counsel grilled Kim Dong-won for more detailed information required for a warrant.

The public announcement by the special counsel of new allegations against the governor has been widely criticized given the low likelihood that Kim Kyoung-soo would have sought help from Kim Dong-won, who has been in state custody since March after he was arrested by police. The elections took place in June.

All the while, the governor has been building up his own defense against the independent counsel. On Thursday, he asked Kim Kyung-soo, a former prosecutor and longtime friend of the governor who shares the same name as him, to lead his legal team.

The lawyer served as a senior prosecutor in the now-defunct Central Investigation Unit and has extensive experience with special investigations. Legal analysts believe his appointment is a sign that the governor intends to fight the allegations to the end.

The independent counsel will likely summon Kim Kyoung-soo for questioning within the week.