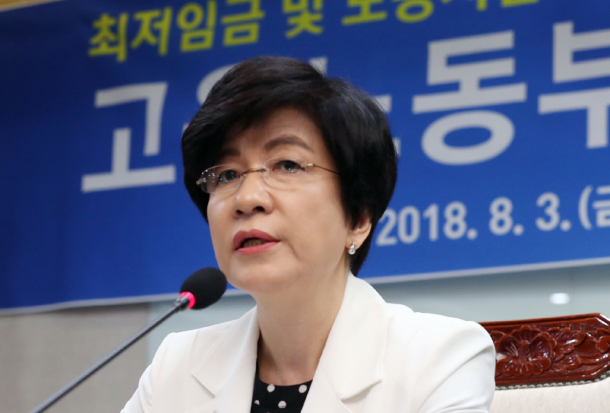 Kim Young-joo, the minister of employment and labor, talks to the heads of organizations overseen by the Labor Ministry at its headquarters in Sejong on Friday. [YONHAP]

The Korean government confirmed that next year’s minimum wage will increase by 10.9 percent to 8,350 won ($7.41) on Friday, turning down a demand by employers’ federations to reconsider the increase, which was determined last month.

“We confirm and notify the public that the minimum wage for 2019 is 8,350 won, which is 10.9 percent higher than the previous year,” said Yi Sung-ki, the vice minister of employment and labor, during a briefing at the Sejong government complex on Friday.

The employers said that the increase fails to take into account businesses’ ability to pay their workers.

“The Labor Ministry determined that there was no problem with the decision by the commission to not differentiate the rate, which was done through a voting process,” Yi said. “It also found no fault with the process of making the final decision through casting votes during the 15th plenary meeting, which was boycotted by the employers’ representatives.”

Yi added that the Labor Ministry said the 10.9 percent increase was based on data that the commission has used for the past few years, which the ministry found to be appropriate.

Since the government implemented the minimum wage law 30 years ago, it received 23 petitions from workers’ and employers’ representatives up until this year. The Labor Ministry has never accepted any of the petitions.

As a result of the decision made by the Labor Ministry on Friday, the minimum monthly salary for an employee who works 40 hours a week will be 1.74 million won, and their minimum annual salary will be 20.94 million won.

“The minimum wage increase will make the lives of low-income laborers more stable and narrow the income gap, which is a serious issue in our society,” Yi said. “To do so requires solving the difficulties faced by small and mid-sized companies [SMEs] and the self-employed.”

“Wages were increased by 16.4 percent this year and 10.9 percent next year,” said the Korea Employers Federation in a statement on Friday. “The drastic and intense spike for two straight years means the [legal] minimum wage is beyond companies’ ability to pay.”

“The minimum wage increase, which is intended to guarantee the livelihood of low-income workers, could end up threatening the job security of workers who earn the minimum wage,” the federation added. “We also expect that side effects, like a drastic hike in inflation, will come as a burden for the entire country and the public.”

The SME federation also said the decision may lead to a decline in investment and discourage companies from innovating, which would ultimately affect the job market.

“We ask the government to swiftly introduce support measures for SMEs and the self-employed, who have reached their limit and can no longer afford the wage increase,” it said.

Owners of convenience stores said the government “failed to hear our outcry,” and demanded once again that it introduce a different minimum wage for businesses with fewer than five employees.

Amid criticism from employers, the ruling Democratic Party asked for understanding, while the main opposition Liberty Korea Party condemned the decision as the Moon administration “looking away from the cries of the public.”

“We are well-aware that small business owners are struggling,” Yi said. “The government is mulling whether to provide different level of subsidies [giving more aid to businesses that are heavily affected by the minimum wage increase].”

“We will provide more financial support to business owners who struggle more than others,” said Kim Young-joo, the labor minister. “The ministry will also open discussions and hear the opinions of experts on differentiating the minimum wage rate depending on the type, region and size of businesses, as well as the issues raised over the decision-making structure and formation of the Minimum Wage Commission.”