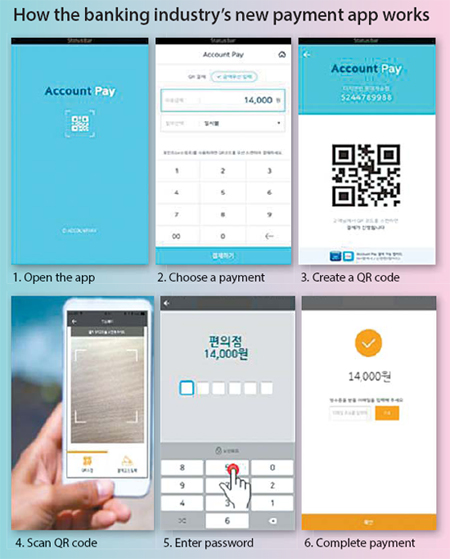 Korea’s financial industry is set to develop a new payment platform that uses QR codes, a system ubiquitous in China, to reduce retailers’ commission fees and expand the use of digital payment systems.

The nation’s central bank will take the lead in developing standardized technology and a mobile application in cooperation with 28 participating financial institutions. They aim to release the platform in the first half of next year.

The Bank of Korea explained Tuesday that the new system will allow users to pay with money from their bank accounts.

Merchants that use the system will not be required to purchase the expensive terminals that enable near-field communication (NFC) payment technology using consumers’ smartphones, which is not ideal for small shops and restaurants.

Many smartphones, such as the latest versions of Samsung’s Galaxy, are equipped with NFC, which uses radio signals to relay payment information.

“We’ve learned that only a small portion of shops - especially mom-and-pop stores - have NFC devices,” said a source at the central bank’s payment and settlement systems department. “As for other mobile payment tools, there are many types of apps for each retailer, and this complexity makes it more difficult for users.”

Another advantage is lowering merchants’ commission fees. The QR code-based platform won’t require payments to third-party agencies, so the fees retailers pay per purchase will also be dramatically reduced, according to the Bank of Korea.

To process purchases, a merchant first needs to open the app, input a purchase and create a QR code. A consumer then scans the code and enters a password to complete the payment.

The move follows the Finance Ministry’s announcement that it will launch its own integrated payment system for mom-and-pop stores in cooperation with major financial institutions, including Kakao Pay, BC Card, Shinhan Bank and Woori Bank. Tentatively named Zero Pay, the platform is also designed to charge no fees to retailers.

The central bank added that its standardized technology will be also deployed by the government-led payment system.

A working group for the project will be launched this month and details of the base technology will come out in October. The group will then start developing a platform in November.

The system, which is relatively new in Korea, comes with a catch. QR codes are vulnerable to security breaches and theft attempts because criminals can replicate the codes and route cash into their own bank accounts.

Faced with various scams, the Chinese government temporarily suspended the use of QR codes for payments in 2014.

The BOK source said that a special committee at the bank and the participating financial institutions will look into measures to prevent security risks.