JEONG HYO-SIK
The author is a Washington correspondent for the JoongAng Ilbo. 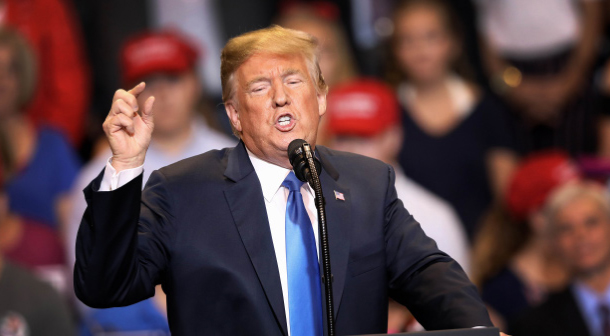 U.S. President Donald Trump has left for summer vacation in Bedminster, New Jersey, on Aug. 2, but he may not be feeling very relaxed. It is not because of the sluggish progress of North Korea’s denuclearization. The midterm elections are coming on Nov. 6, but positive economic reports are not reflected in his approval rating. It would be a nightmare to lose the Congress to the Democratic Party in the midterm election. An election defeat could put him on a highway to impeachment, not to mention imperiling his 2020 re-election bid.

On July 27, U.S. gross domestic product growth for the second quarter was 4.1 percent. The market predicts that the growth rate in the third quarter will exceed 5 percent. For the world’s biggest economy, 4 to 5 percent growth is remarkable. On the day that the numbers were announced, Trump appeared on the “The Sean Hannity Show” and said that if the trade deficit was cut in half, the economy could grow by 8 or 9 percent.

But the same poll showed that Trump’s overall approval rating was 43 percent, while his disapproval rate was 53 percent. This is the first time that the presidential approval rating has come short of his economic approval rating in 20 years, or since President Bill Clinton was investigated for the Monica Lewinsky scandal in 1998.

Trump blamed the investigation into potential collusion with Russia in the election for the approval rating. He demanded that Attorney General Jeff Sessions “stop this rigged witch hunt right now” on Aug. 1. From the morning until late at night, he tweeted eight times about it. Newt Gingrich, who advises Trump on political matters, appeared on Fox News and said that Trump “has every right to be deeply, deeply frustrated at the failure of his attorney general to exercise leadership.”

It is only natural that Trump is focused on the probe that could determine his fate. At the first National Security Council meeting that Trump called after the June 12 Singapore summit on July 27, only Russia’s election intervention was discussed. North Korean affairs were not mentioned. Not a step has been taken on denuclearization aside from the partial return of remains of U.S. soldiers from the Korean War.

Korean Foreign Minister Kang Kyung-wha, director of the National Security Office Chung Eui-yong and National Intelligence Service director Suh Hoon visited the United States, but the Trump administration maintained sanctions on the North. Despite the urgency of the issue, the United States seems to now be controlling issues with the midterm elections in mind.