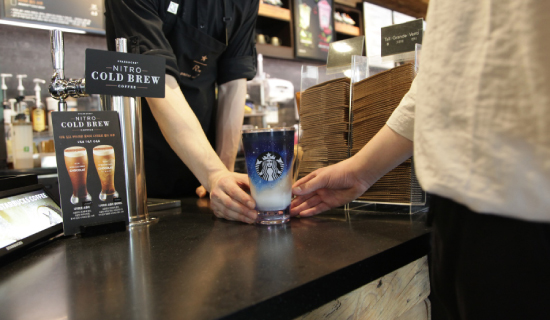 A customer receives a coffee drink in a tumbler, an alternative to disposable cups, at a Starbucks cafe in Seoul. [STARBUCKS KOREA]

Kyobo Life Insurance has chosen tumblers from a local coffee franchise for over 400 clients to use instead of conventional disposable cups for a day-long annual conference scheduled for later this month. A Twosome Place will serve coffee and water in the tumblers at the conference venue, and attendees can bring the tumblers home after the event is over.

As the Korean government has banned disposable cups at cafes, except for take-out orders, as of Aug. 1, consumers are turning to personal containers, mostly tumblers, as an alternative to disposable cups. Bringing one’s own drink container offers perks for consumers: some cafes offer discounts of 200 to 300 won ($0.18 to $0.27) per drink.

Another alternative is using mugs to enjoy drinks in the cafe, but they require additional labor for stores to wash, which is already causing grumbling by some coffee shop owners.

Lock&Lock, a local household product company, said Friday that sales of its tumblers grew by 73.6 percent in June over the same time last year.

“There used to be strong perception among Korean consumers that tumblers are a winter item, but their sales have been rising this summer, propelled by a social atmosphere that thinks more about the environment,” said a spokeswoman at Lock&Lock. “Since tumblers are not only meant to lock in warmth but also to keep drinks chilled, their popularity is expected to persist throughout this particularly hot summer.”

Government organizations, under the leadership of the Environment Ministry, have been advocating tumblers in the wake of China’s decision at the beginning of this year to prohibit imports of solid waste. The Ministry of Welfare even went so far as to bar officials from entering its building with disposable cups in their hands starting in July. The Ministry of Foreign Affairs gave out tumblers to each of its employees at the end of June.

“It’s a nuisance having to wash my tumbler either at home or in the office before I use it, but I am getting used to it,” said a ministry official.

Starbucks Korea, which has over a quarter of the local cafe chain market share, said sales of tumblers did not grow significantly in the first six months of this year compared to a year earlier. But the number of customers who bring their own tumblers has been on the rise. The trend is likely gather momentum over time, given that the government-imposed ban just went into effect, according to a Starbucks spokesman.

“We are seeing more and more customers bringing their own tumblers,” he said.

In June and July, 1.2 million customers received discounts for bringing in their own containers at Starbucks stores nationwide. The average for the two months, at 600,000, is almost double the monthly data from last year, which averaged 317,000 a month.

Aside from Starbucks, 15 other well-known cafe chains and five fast food franchises inked voluntary pacts with the Ministry of Environment to provide discounts to those who bring their own tumblers or mugs. They include the Coffee Bean & Tea Leaf, Cafe Pascucci, Angel-in-us Coffee, Ediya Coffee, Krispy Kreme, A Twosome Place, Lotteria and McDonald’s.