Gov’t warns BMW owners not to risk driving them

Gov’t warns BMW owners not to risk driving them 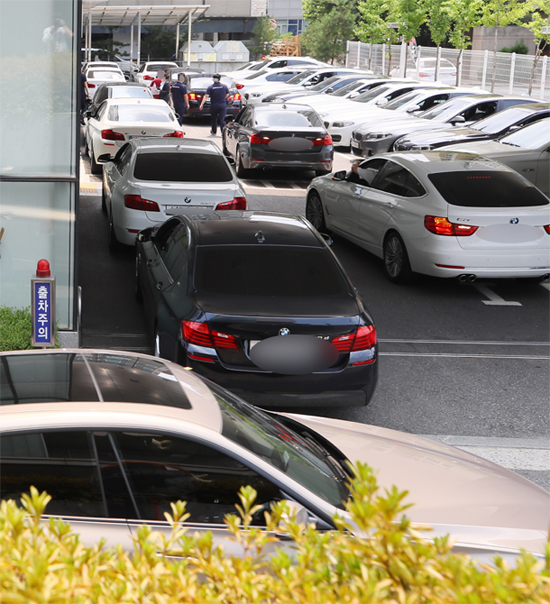 BMW vehicles subject for recall line up at a service center in Seoul on Friday to receive emergency safety inspections. [YONHAP]

The Transport Ministry urged BMW owners to keep their cars in the garage after a number caught on fire and safety checkups were delayed.

The ministry is examining whether the carmaker rolled out safety checks expeditiously or in a way that would have downplayed the crisis.

In a statement to the nation Friday, Transport Minister Kim Hyun-mee told owners of BMW vehicles being recalled to avoid using them until they get a safety checkup by an after-sales service center.

BMW Korea has been carrying out emergency safety checkups at 61 service centers nationwide as a temporary solution before the official recall starts on Aug. 20. Customers have been complaining that the company’s hotline and service centers were too busy.

The minister told the German carmaker to take the situation more seriously and handle the case with the utmost responsibility.

“Until an owner is assured of his car’s safety through an inspection, we urge those who own a BMW vehicle to refrain from driving the car,” Minister Kim was quoted as saying at a Friday briefing in Seoul. “We will also look into whether the related government bodies and BMW have been handling the issue appropriately.”

The statement came amid mounting anxiety across the nation over the fire-prone vehicles and opacity about the cause. BMW Korea is blaming a component called the exhaust gas recirculation, or EGR.

But doubts have emerged. Some analysts said a defective EGR can’t explain the large number of fires breaking out in such a short period of time - and only in Korea.

Nearly 30 cases of BMW vehicles bursting into flames in Korea have been reported this year. More than 10 520ds models burnt in July alone. BMW Korea said it is looking into why such a high number of cases are breaking out in Korea.

The ministry said it hadn’t determined the cause of the fires but approved the carmaker’s recall plan preemptively for safety reasons. It said there might be more to the case than just EGR defects. BMW Korea was scheduled to submit a detailed report explaining why the EGRs are at fault to the ministry on Friday.

“We will join forces with all related parties to investigate the case,” said Kim Chae-gyu, director general for motor vehicles management at the Transport Ministry on Friday.

“If we find more defects, the ministry can roll out a mandatory recall,” he added.

The ministry had initially said it will take at least 10 months to finish its investigation. On Friday, Director General Kim said the inspection team will try to shorten the period considering the seriousness of the case.