Moon may ask rep from opposition to join cabinet

Moon may ask rep from opposition to join cabinet 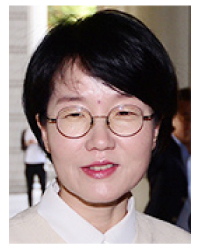 President Moon Jae-in is mulling the appointment of Park Sun-sook, an opposition lawmaker, as his next environment minister, according to sources inside the Blue House. The move is seen as part of the administration’s attempt to expand support among opposition parties for its legislative agenda.

The JoongAng Ilbo published an exclusive story on Friday quoting two high-level sources within the Blue House who said Park, a two-term representative of the Bareunmirae Party, is at the top of their list for a seat in a “collaborative cabinet” the administration is planning to build.

Park served as Blue House spokesman during the Kim Dae-jung administration from 2002 to 2003 and as a deputy environment minister during the Roh Moo-hyun government from 2004 to 2006.

Once known as an apologist for former Bareunmirae chairman and perennial presidential hopeful Ahn Cheol-soo, she served as Ahn’s spokesman when he spearheaded the creation of the People’s Party before the 2012 parliamentary elections.

Yet her closeness to Park Jie-won, a four-term lawmaker in the PDP who holds powerful sway among lawmakers hailing from the Jeolla region, and her liberal views makes her an ideal candidate for a place in a collaborative cabinet, said a source from the Blue House.

According to other sources in the ruling Democratic Party (DP), its floor leader Hong Young-pyo has been in consultation with the Blue House to tap Park as a cabinet member since earlier this year.

The president’s office made its plans to include opposition figures in the cabinet official on July 23 when Blue House spokesman Kim Eui-kyeom said it was “willing to form a ‘collaborative cabinet’ which includes [opposition] figures deemed appropriate.”

Park Jie-won and the PDP have been strong proponents of cooperation between progressive-leaning parties, and the appointment of Park Sun-sook may help appease the PDP, the left-wing six-member Justice Party and a few liberal independent lawmakers and get them to join the 129-member DP in creating a 157-strong bloc in the legislature capable of pushing through Moon’s reform agenda.

Park Sun-sook’s appointment might even get some support from the Bareunmirae lawmakers.

Reaction to the proposal on Friday among the conservative opposition, including the Bareunmirae Party, was far from positive, though. Kim Dong-cheol, the Bareunmirae’s interim leader, said the Blue House was attempting to test them with the offer.