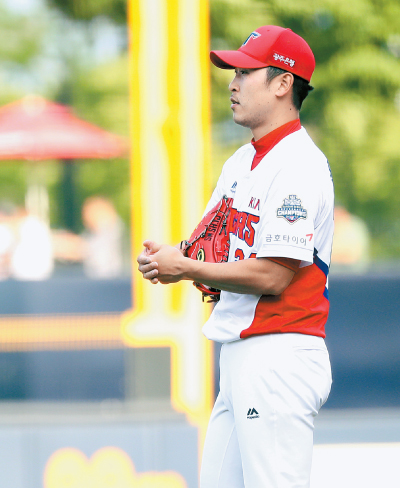 Yoon Suk-min of the Kia Tigers has set aside his successful career as a starting pitcher and is focused on his new role as the team’s closer.

Yoon, the Tigers’ starter since the 2005 season, had to skip the entire 2017 season due to a shoulder surgery which he had after the 2016 season wrapped up. Though Yoon was expected to start the 2018 season in March, a longer-than-expected rehabilitation kept him out until June.

After his long-awaited return, Tigers fans expected him to have a big impact on the team’s pitching rotation. But his addition became a concern, as he wasn’t playing up to his old standards. In the first three games Yoon started, he lost three times and racked up a miserable 9.00 ERA. He and the Tigers then agreed that he should switch to closer.

The change was the right decision. Since Yoon became the Tigers’ closer on June 20, he picked up six saves in 10 games and recorded a 2.70 ERA as of Saturday.

“Just by looking at the statistics, it’s gotten better,” Yoon said during an interview with Ilgan Sports. “I’m starting to feel more comfortable and getting used to the new batters. I’m just focusing on my role.”

Despite his strong performance, Yoon said he still has not fully recovered from the surgery.

As of Saturday, Yoon has pitched 10 innings as a closer and has only given up three runs. In his eight most recent games, Yoon has given up one run in eight innings. Yoon now has a 6.58 ERA with three losses and six saves in 13 games this season.
Despite his apparently successful switch, Yoon still isn’t satisfied.

“Since I still have a lot to think about when I’m on the mound, I can’t say I’m satisfied,” Yoon said. “My shoulder still feels dry. I hope my arm adjusts to it quickly and I can pitch more smoothly. I need more time to fully recover, but I don’t have time to rest. When I talked to the players who underwent [shoulder] surgery, they said I have to overcome this.”

During the 2011 season, Yoon had the most wins and strikeouts, highest winning percentage and lowest ERA of all pitchers. At the time, he could throw a fastball 150 kilometers (93 miles) per hour and a slider at a speed of 140 kilometers per hour.

But a surgery in 2016 took away Yoon’s pitching speed. His strongest recent fastball, during the Tigers’ game against the Lotte Giants on July 31, was just 144 kilometers per hour.

“It’s not easy to pitch like I did before,” Yoon said. “It’s been years, I’ve gotten older and I had surgery. There are a lot of expectations, but I need to accept it myself. I’ve gotten weaker so I need to adjust to my current form and pitch according to it.”

Though Yoon doesn’t have much ambition to pitch faster, he believes that the speed of his pitches will go up once he recovers from his shoulder pain. As he only recently returned to the league, Yoon is more focused on getting rid of the pain than speeding up his throws.
“I have less pain, but this doesn’t mean I don’t have any pain,” Yoon said. “I need to slowly overcome this.”
After switching to closer, Yoon has 12 strikeouts without giving up a single walk or blowing a save.

“When I [returned] as a starter, I gave up a lot of runs by giving away unlucky hits and home runs,” Yoon said. “As I get used to the batters, I’m starting to feel more comfortable on the mound.”

Throughout Yoon’s 14-year KBO career, he has picked up 77 wins, 70 losses and 81 saves with a 3.25 ERA. While Yoon mostly started, he also played some games as a reliever and now is settling into his new role as a closer.

“Unlike the past, I’m older, and I’m a veteran on the team now,” Yoon said. “Considering the situation our team is in, I don’t really care [about the position]. I’m still on the team because they need me in a certain role. So I need to work harder.”

Yoon is now the second-oldest pitcher on the Tigers’ roster after Lim Chang-yong, who recently picked up a win as a starter at age 42 during a game against the Giants on August 1.

“Since we have a lot of young players, I tell them a lot about my experience,” Yoon said. “It’s hot and our team’s not playing well. Due to overuse of relief pitchers, they are having a hard time physically. So I believe that my role is to encourage them and help them play better. By doing so, I think that our team will also play better.”