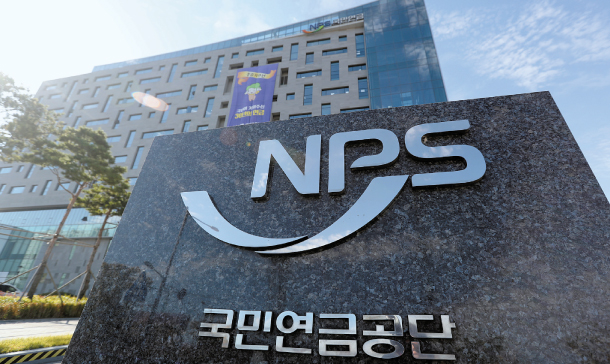 The National Pension Service, based in Jeonju, North Jeolla, is set to actively monitor and engage in the companies that it has invested in as it has adopted the stewardship code. [JOONGANG ILBO]

The government hopes that the introduction of a stewardship code will address the issue. By adopting the code, the National Pension Service (NPS), the largest institutional investor, has agreed to actively monitor and engage in the companies that it has invested in.

Here’s the basics on the stewardship code, its implementation and the changes that it could bring. 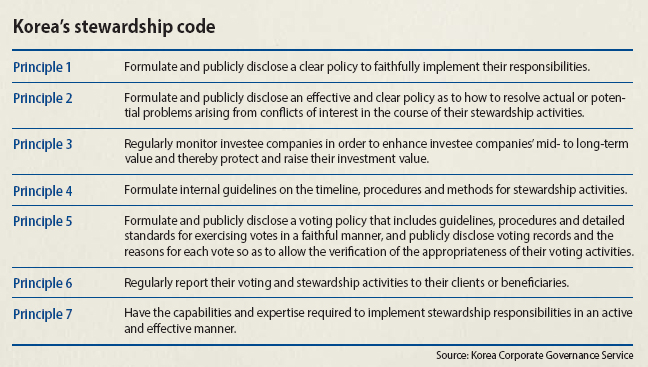 Q. What is a stewardship code?

A stewardship code is a set of principles aimed at guiding institutional investors to exercise their voting rights in a transparent and responsible manner. The measure, which is not legally binding but should be publicly released, was first adopted in Britain in 2010. The British version of the code calls on influential investors to publicly manage conflicts of interest and establish a transparent voting policy. The stewardship code also asks investors to list situations that warrant collective action with other stakeholders and publish voting activities.

Japan followed in Britain’s footsteps in 2014 by introducing its own version of the code. Although the details and wording are slightly different, the direction is in line with that of Britain.

Q. Why has the NPS decided to implement it?

The NPS is not only Korea’s largest institutional investor with stakes in over 700 companies, but also the third largest pension fund in the world with a fund amounting to 634 trillion won ($561 billion). When the government decided to adopt the stewardship code in December 2016, the NPS was the most obvious candidate due to its size and stature.

The pension fund refrained from joining the code until recently, but a growing call from financial regulators and the general public pushed the NPS to sign last month. The most powerful trigger was criticism over the fund’s controversial vote in favor of a merger between Samsung C&T and Cheil Industries, back in 2016.

The pension fund, then the top shareholder of Samsung C&T, approved the merger despite a minority shareholders’ claim that the deal underestimates the value of Samsung C&T against Cheil. It was later revealed that the former Park Geun-hye administration pressured the NPS to vote for the merger in connection with the influence-peddling scandal involving her confidante Choi Soon-sil. The revelation made it difficult for the NPS to oppose the adoption of the stewardship code. 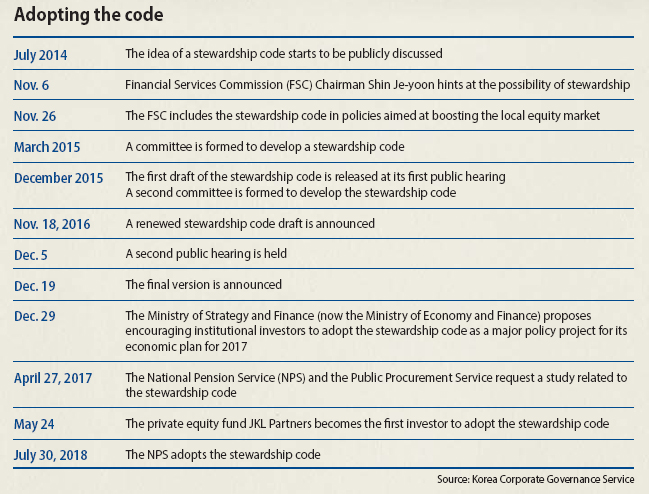 Q. How will the NPS exercise its shareholder rights?

Above all, the NPS needs to comply with the seven principles of Korea’s stewardship code.

The principles include the disclosure of policies related to class actions with other investors and the management of conflicts of interest. The fund is also required to reveal voting policies, results and the reasoning behind its decisions, as well as actively monitor the companies that it has invested in.

The most notable change is that the stewardship code allows the NPS to demand closed-door meetings with management if decisions go against the interests of shareholders. The NPS said it will hold such meetings starting from 2019 and reveal a list of companies that fail to follow the fund’s advice in 2020. The institution also mentioned that it could exercise its voting rights in management decisions such as selecting or firing executives, but refrained from mentioning a specific timeline.

Q. What role did the NPS play before it adopted the code?

The NPS used to be passive in exercising its voting rights and routinely agreed to proposed agendas in shareholders’ meetings. It rarely questioned executives of the investee companies, even when they were accused of financial crimes such as embezzlement. Of the votes the fund cast in 2016, only 10 percent were in opposition to proposals. The rate rose to 13 percent in 2017.

Q. What is to stop the NPS being politically manipulated?

With the introduction of the stewardship code, the NPS will reorganize the structure and membership of its voting rights decision committee to be more independent of external forces and exercise voting rights in a more “responsible manner.”

The committee, which formerly had nine members, will now invite more outside experts and exclude high-ranking government officials to prevent voting decisions from being susceptible to political whirlwinds. The new committee will have 14 members, with five new positions overseeing whether voting decisions are in line with stewardship code principles.

Still, many in the business community think that those measures will not be sufficient, especially as the National Pension Fund Management Committee will still be headed up by the health and welfare minister.

There have been arguments that the NPS Investment Management, which is responsible for investments, should be spun off from the NPS as an independent public institution specialized in investment to increase its independency and raise its expertise.

Q. Could the vacuum at the top of the NPS have any impact on how it exercises its rights?

The vacuum of the NPS top management has been a major concern. The fund has been without a chief information officer (CIO) for more than a year since Kang Myoun-wook abruptly resigned in July last year. Cho In-sik, head of global public market, had been serving as the acting CIO, but he resigned last month. Investment strategy head Lee Su-cheol has been filling the position since.

The loss of so many employees, especially from senior positions, has raised concerns that the NPS lacks the proper experts to make informed decisions on voting policies and to pressure companies to adopt policy changes.

Q. Have there been any notable incidents of a pension service exercising its rights under the stewardship code in other countries?

Since the U.K. Financial Reporting Council introduced the stewardship code in 2010, 20 other countries have adopted the investment guideline.

It has been seen as a win-win strategy that improves the transparency of companies’ corporate governance structure while maximizing shareholders’ rights that will result not only in increasing shareholders’ profits but also raising companies’ value.

The adoption of stewardship code is also thought to have improved markets.

In the case of Britain, the Financial Times Stock Exchange 100 in the first quarter of this year was up 4 percent, higher than the 3 percent range in 2009 before the stewardship code was adopted.

Additionally dividend payout ratios have gone up as well.

While some investors actively engage in the stewardship code, some take a less aggressive approach.

Blackrock attends almost all shareholders meetings. It exercises its proxy vote in more than 90 percent of over 15,000 shareholders meeting in roughly 90 countries. Under the U.K. stewardship code, Blackrock discloses its participation and its decisions on various issues ranging from corporate governance, wage issues, selecting management and M&As.

The reasons for agreeing or disagreeing are posted on Blackrock’s website.

Japan is less aggressive in its interpretation of the stewardship code.

The Government Pension Investment Fund (GPIF), which is the world’s largest public fund, entrusts its responsibility and rights to asset managers while only providing the basic guideline of maximizing shareholder value. The GPIF only evaluates the decisions that the asset management companies have made on their behalf.

Q. Can we expect to see the NPS getting involved in any ongoing cases?

The market is already anticipating that the NPS will immediately involve itself in Korean Air, whose owner family is mired in controversy over a range of abuse of power cases and ongoing legal investigations.

The NPS is likely to quickly exercise its voting rights over management decisions as the value of Korean Air shares has fallen 19 percent since the most recent abuse of power scandals broke in April.

Additionally, SK Securities, in a report released last month, projected that the NPS will be more aggressively exercising its rights on over 30 companies that it has more than a five percent stake in to improve their dividend policies. Currently, 12 companies have not paid a single dime in dividend returns despite posting profits for the last three years, and 16 have paid less than 10 percent.