A bird’s-eye view of an apartment complex in the Gangnam area of southern Seoul, which has proved nearly impervious to government efforts to lower real estate prices. [YONHAP]

A year has passed since the Moon Jae-in administration tightened real-estate regulations on Aug. 2, 2017, with the aim of curbing speculation in the market.

One year later, the country’s housing market is more polarized than before, with apartment prices in Seoul refusing to drop while the market in other regions stagnates.

According to recent data from the Korea Appraisal Board, a government-run real estate information provider, the average price of apartments in Seoul increased by about 20 percent from 582.82 million won ($516,617) in August last year to 695.93 million won in July this year. Apartment prices in the Seoul metropolitan area, which includes Seoul, Incheon and Gyeonggi, rose by about 14 percent during the same period, from 388.09 million won to 443.48 million won.

In comparison, the average apartment price in regions outside Seoul and Gyeonggi only rose by 5 percent during the same year, from 192.50 million won to 203.20 million won.

Apartment prices in areas such as Ulsan, Pohang in North Gyeongsang and Geoje, South Gyeongsang, tumbled in the past year, with Geoje prices dropping by 14 percent.

“I would say the regulation half succeeded and half failed,” said Kwon Dae-jung, a professor of real estate at Myongji University. “It has changed the trend of the real estate market by slapping heavier taxes on multiple home owners, but the regulation has also pushed up the price of housing in Seoul while pressing down prices in other regions.”

“Polarization between Seoul and other regions has gotten much worse,” Kwon added. 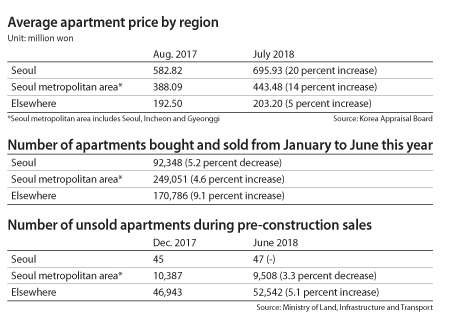 The policy changes raised the number of so-called speculative regions, which raised the loan-to-value (LTV) and debt-to-income (DTI) requirements for mortgages.

Areas now designated as “speculative zones” include Sejong, home to the government complex. It also declared the entire city of Seoul as an “overheated zone” subject to government monitoring.

The government also pushed down the LTV and DTI requirement from 60 to 40 percent.

The tax levied on those who own more than two apartments also rose by as much as 20 percentage points.

The measures were intended to cool down the real estate market and to curb rising household debt, which is considered a ticking time bomb for the Korean economy, especially when interest rates are increasing. Korean household debt reached nearly 1,500 trillion won as of the first quarter of this year. However, the pace of its increase slowed somewhat from nearly 10 percent per quarter last year to around eight percent in the first quarter of this year, thanks to a number of factors, including the housing market regulations.

But while it is slowing Korea’s growing debt, the crackdown has also polarized the housing market.

The market in the affluent Gangnam region in southern Seoul, composed of the districts of Gangnam, Seocho and Songpa, once again proved that it is nearly impervious to government intervention.

Data from Budongsan 114, a real estate information provider, showed that, as of July 20, apartment prices per 3.3 square meters (35.5 square feet) in the Gangnam region stood at 28.37 million won, over 10 million won higher compared than the Gangbuk areas north of the Han River, which averaged 18.24 million won.

Another indicator that a rift is growing between the real estate market in Seoul and the rest of the country is the number of apartments not sold during their pre-construction sales period.

In Korea, it is common for construction companies to raise the funds necessary to build apartments through pre-construction sales.

Data from the Ministry of Land, Infrastructure and Transport showed that, in Seoul, a total of 45 apartments were not sold during their pre-construction sales period in December last year. The number barely budged to 47 in June this year.

On the contrary, the number of un-sold apartments outside of the Seoul metropolitan area went from 46,943 last December to 52,542, a 5.1 percent increase.

“The fall in the number of apartments sold during pre-construction sales is especially evident in regions outside of Seoul,” said Kwon. “It shows that the government’s intent to control housing prices in Seoul backfired.”

The regulations have also put a damper on housing transactions in general.

Data from the Land Ministry showed that the number of apartments sold in the first half of this year throughout the country declined by 4.4 percent compared to a year ago. While the number of transactions only fell by 0.2 percent in the Seoul metropolitan area, they plunged by 9 percent elsewhere.

“The number of real estate transactions also tumbled in the first half of this year,” said Chae Sang-wook, a real estate analyst at Hana Financial Investment. “This is an effect of the regulations introduced on Aug. 2 last year.”

The government recognized the side effects of the policy.

“Some regional [housing] markets look to have fallen into a recession due to the difficulties with their economies and oversupply [of apartments],” said Kim Hyun-mi, the country’s land minister, during a meeting with reporters in late June. “We need policies that can revive the regional economies or control the apartment supply.”

The government is considering additional measures, including designating more areas as “speculative zones” while removing some areas from the watch list, according to the Land Ministry on Thursday.

Some parts of the capital, such as Yeouido in western Seoul and Yongsan District in central Seoul, have witnessed their housing markets sizzle in the recent weeks after Seoul Mayor Park Won-soon said the city government will develop those areas.

The average price of apartments in Yongsan rose by 0.27 percent since early July, and prices in Yeouido went up by 0.25 percent.

“The ministry has not made any detailed decisions regarding this matter,” said an official with the Land Ministry. “But it is closely monitoring which areas are experiencing heat or stagnation.”

Changes to the tax code that are set to go into effect next year will also impact the housing market one way or another.

The Ministry of Economy and Finance revealed a tax reform scheme last month that included an increase to the so-called comprehensive real estate tax that puts a greater burden on owners of multiple homes.

“The real estate market has already shown some reaction to the measure,” said Kim Se-ryeon, a real estate analyst at SK Securities. “While the overall index has not fallen, the rise in housing prices in three districts in Gangnam - which hold up the index - has shown deceleration, and a fall in the overall index seems inevitable.”