NEW YORK - The "meowdels" wore couture and the crowd was cat-tastic at The Algonquin Hotel’s annual feline fashion show, presided over by the historic Times Square establishment’s 12th resident cat, a ginger boy with a theatrical name, Hamlet VIII. 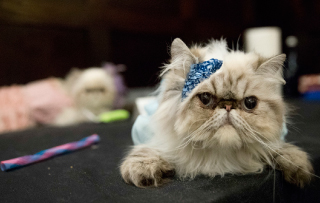 Thursday’s theme for the catwalk and lobby party, with some human attendees in cat-ear headbands and feline-adorned finery, was "The Purring `20s." That’s the era that Dorothy Parker, George S. Kaufman, Alexander Woollcott and other writers, critics, actors and all-around wits first sat around the hotel’s famed Round Table.

Hamlet VIII made his party debut this year, perched in his treehouse at the front desk, strutting for guests in a sparkly silver bow tie as about 150 human partiers munched on hors d’oeuvres and sipped wine. Their camera phones were at the ready as four-legged models were held by their owners for a red carpet walk, including a tiny cutie just a month old, a black rescue named Frank Sinatra. His bespoke ensemble included a puffy red newsboy hat.

The event is a fundraiser for the Mayor’s Alliance for NYC’s Animals, which helps support more than 150 animal shelters and rescues in New York. Organizers said more than $10,000 was expected to be raised, fueled in part by $75-a-pop ticket sales and a silent auction.

As for the fashion, it came courtesy of "certified" pet fashion designer Ada Nieves. Leather? Absolutely not, she told The Associated Press in a pre-show interview. There were Art Deco touches in crystals and laces, a pink-fringe flapper dress and feather head band worn by a longhair named Aine, and a knockout orange youngster that goes by Mango in a bowler hat and double-breasted tuxedo.

A chill girl rescue named Sake got a wide-brim garden hat and lavender low-waisted dress a la the Roaring `20s, while Baloo scored a striped zoot suit for his big runway moment.

The long history of cats presiding at The Algonquin is a bit murky but dates to the early `20s with Billy, who during the heyday of the Round Table belonged to hotel owner and manager Frank Case. After Billy passed away, so the story goes, a stray marmalade cat made his way into the hotel in the early 1930s and was declared Rusty. The name didn’t sit well with actor John Barrymore, a hotel resident at the time, so Rusty became the first Hamlet, honoring what is said to have been Barrymore’s greatest stage role.

"They thought the name Hamlet was more dignified for the Algonquin," said Alice De Almeida, the hotel’s Chief Cat Officer. "And a legend was born."

Hamlet is, indeed, the eighth Hamlet at the Algonquin, which has also been home to three cats named Matilda - rescues each and every one.

"We have no clue who picked the name Matilda or why," De Almeida said.

The current Hamlet is a people cat, though he’s not terribly fond of huge TV cameras. He loves a good scratch behind the ears, De Almeida said. The hotel chef cooks him special meals on holidays and his portrait hangs above the front desk. The white-glove treatment for felines stretches back to Rusty, who had the run of the hotel (Hamlet VIII is restricted to the front desk area) and was given milk out of a Champagne glass, De Almeida said. As for the Round Table crowd and whether they were cat people, she wasn’t sure.

"We know Dorothy Parker had dogs," De Almeida said. "At that time there was no board of health, so Rusty was in and out of rooms, and they had a special door for him to go in and out of the kitchen. He sat in the Blue Bar. I mean, who had a better life?"

Hamlet’s life is pretty sweet. He receives fan mail and gifts from around the world thanks to the international guests he has befriended at the front desk. He will soon have a picture book telling his story and that of his hotel home. The hotel went with a Roaring `20s theme for its fashion show this year to mark the 125th birthday of the caustic Parker, a poet and critic who was omnipresent at the Round Table’s near-daily lunches. Really, though, it was all about the cats.

"I’m looking around the room and thinking this is one place, at least for the next hour, where every person has a smile on their face," said Kathleen Duffy, a hotel spokeswoman. "We need that right now."