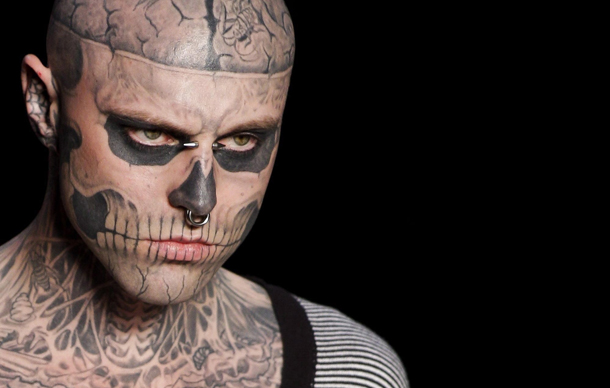 MONTREAL - Rick Genest, a Quebec model known for his head-to-toe tattoos and participation in the Lady Gaga music video “Born This Way,’’ has died, his talent agency said.

Dulcedo Management confirmed on Facebook late Thursday the passing of Rick Genest, who was better known as Zombie Boy. Dulcedo said it “was in shock’’ and called the 32-year-old represented by the agency an “icon of the artistic scene and of the fashion world.’’

Lady Gaga said on her official Twitter account Thursday night that “the suicide of friend Rick Genest, Zombie Boy is beyond devastating.’’

The American singer added: “We have to work harder to change the culture, bring Mental Health to the forefront and erase the stigma that we can’t talk about it.’’

But while his outward appearance may have been intimidating, he was unfailingly mild-mannered and polite, according to the CEO of the Welcome Hall Mission, a homeless shelter Genest visited as a teen and continued to support as an adult.

Sam Watts said he last saw Genest in June, when the artist lent his famous image to a campaign to raise awareness about the issues facing marginalized and homeless youth.

“This was a guy who put you totally at ease,’’ he said.

“Immediately you knew this was a kind and gentle soul who had some deep concerns about anybody who is on the fringes or being dismissed for how they looked.’’

In early 2011, a photo of Genest in a fashion magazine drew the attention of fashion designer Nicola Formichetti, then the artistic director for French fashion house Mugler.

It was Formichetti who helped Genest secure his first major modelling gigs with Mugler and introduced him to Lady Gaga, who cast him in the video for her 2011 single “Born This Way.’’

Quebec’s coroner’s office said an autopsy would be conducted to determine the cause of death.