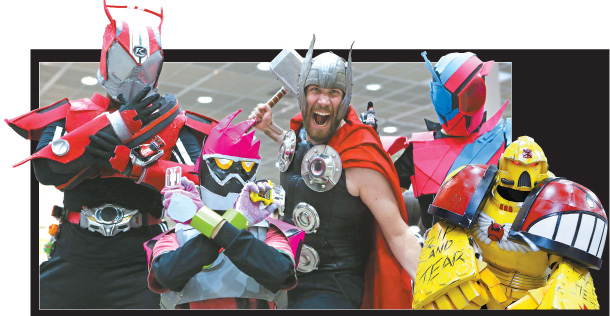 Cosplayers dressed up as their favorite superheros pose for the camera. Some of them spend up to a year working on their looks to sport at Comic Con. [COMIC CON SEOUL]

With every minor move of his body and change in his facial expression, Ezra Miller sent fans into a frenzy.

The ‘Justice League’ star - he plays the speedy hero Flash in the series - visited Seoul for the first time on Friday to attend the second edition of the city’s Comic Con, and was welcomed by roaring cheers. Michael Rooker, who plays the blue-skinned space outlaw Yondu in the “Guardians of the Galaxy” series, also joined Miller at the international pop culture extravaganza, which wrapped up on Sunday. 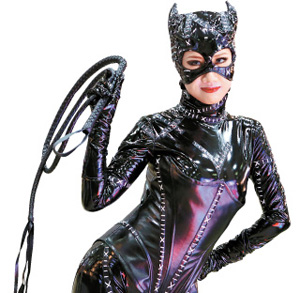 Well aware of his stardom in Korea, Miller described Korean fans to be “amazing, devoted and creative” on the opening day of Comic Con Seoul. The Hollywood star, who refused to be photographed, clearly appreciated the love, occasionally flashing kind smiles to the crowd.

He clearly expressed his views on the importance of embracing diversity - a controversial topic in a country that is currently struggling to embrace foreigners, including the 500 Yemeni asylum seekers that arrived on Jeju Island in May.

From left to right, a cosplayer shows off his Batman costume, a large blow-up figure of Marvel villain Thanos stands at the entrance of the event hall and a group of people pose with zombies from the American drama series “Fear the Walking Dead.” [COMIC CON SEOUL, JIN MIN-JI]

His respect for diversity is part of the reason Miller loves Comic Con so much. He called it a “safe space” for people “whose heads work in different ways.”

“The world is full of hatred, fear and violence,” said Miller. “There are safe spaces that radical communities create so that we can express ourselves fully, talking about the things we like and exploring the things we’re interested in without having to fear retribution.”

He added, “My experience with Comic Con is that these are safe spaces.”

More interactive with his fans was the upbeat Rooker, who jumped off the stage and did not return until he had to leave during his meetup with fans on Saturday. “Are you going to appear in ‘Guardians of the Galaxy Vol.3?” a fan inquired, wondering if there was any chance of Rooker’s character returning after his death. The actor confidently answered, “No.”

Fans of comics, films and gaming congregated at COEX in southern Seoul over the weekend, decked out in unique costumes to honor their favorite characters. Though temperatures reached nearly 40 degrees Celsius (104 degrees Fahrenheit) over the weekend, it could not stop the passionate cosplayers from putting on a variety of heavy, layered and sometimes furry costumes for the event.

“I love Comic Con Seoul,” said a 16-year-old American from Texas who has lived in Korea for six months. Dressed in a purple and white bear costume, she praised Comic Con Seoul for its “cool” exhibitions and events like the drawing simulation on stage by illustrators and comic book artists like Kim Jung-gi and Peter Nguyen. But most of all, she loved the cosplayers in Seoul.

“I’ve been to Comic Cons in Texas and New Mexico, but Seoul is the best I’ve been to so far. It has the best cosplayers. I just saw a Kylo Ren, and he seemed so real ? [he had a] sleek look and a voice changer. It was better than what I have seen at Disneyland in California,” she said.

Last year’s Comic Con was criticized for a lack of organization and creativity in filling up the space, leaving many to believe that it would be the first and last Comic Con in Korea.

Though festivalgoers appreciated that the Comic Con provided a venue for cosplayers to dress up and freely roam around in costume for the first time, they were critical of the confusion caused by ReedPop, the event’s host, and their poor planning. Last year, the event’s lineup - a crucial way of stirring up excitement - was revealed far later than its scheduled announcement date. Many attendees also complained that despite being called Comic Con, the event failed to differentiate itself from smaller comic fairs previously held in Korea. 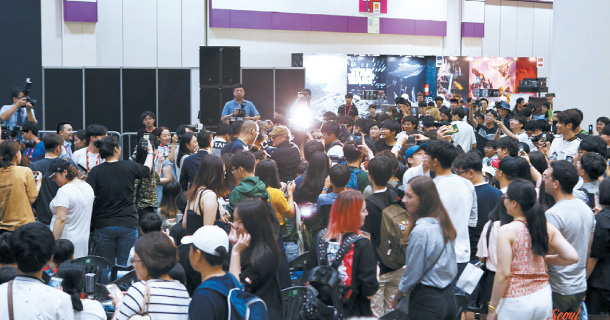 To the relief of its host, the reviews of this year’s Comic Con were a lot more favorable. Attendants commented that the events were much more organized and that they were generally satisfied with the number of creative booths.

“There seem to be more attendants and cosplayers this year,” said 43-year-old Asuka from Japan. Dressed up as the thunder god Thor, a costume that he also wore last year, he flew to Seoul again this year just to attend Comic Con. Comparing his experience at Comic Cons held in San Diego and Tokyo, he said, “[the] people here are more active and enthusiastic about taking photos [with cosplayers].”

Another charm of Comic Con is the abundance of rare character goods that can be purchased for more reasonable prices than usual, according to fans.

In front of a booth that sold superhero figures, a man who came with his girlfriend was carefully checking out an Iron Man figure. When the vendor was asked what the price of the figure was, they said 570,000 won (＄520), adding “It’s really cheap, isn’t it?”.

“The average price of such a high quality superhero figure could be as high as 800,000 won,” said Park. “And with the additional Pepper Potts [Iron Man’s girlfriend] figure, I feel like I bought it for around a 40 percent discount.”

Though Comic Con was a feast of excitement for many, some attendants could not help but feel bitter: fans of DC Comics. Their disappointment was not surprising, as there were obviously more booths dedicated to Marvel characters at the event.

“As a fan of DC Comics, I feel quite sad about the skewed attention towards Marvel,” said an 18-year-old surnamed Kim, who dressed up as the Joker’s love interest Harley Quinn. “There is a lot more space dedicated to Marvel, including the game zone and a short walk exhibition that looks at the history of Marvel films over the past decade. And there are a lot more cosplayers dressed up as Marvel characters. As a DC fan, that’s a little discouraging.”

In addition to the overwhelming presence of Marvel, some of her friends were hesitant to attend this year’s Comic Con because of Rooker, who along with his “Guardians of Galaxy” co-stars, has shown open support for the franchise’s director James Gunn. Disney fired Gunn from “Guardians of the Galaxy Vol. 3” last month after some of his 2009 tweets, which included offensive jokes about rape and pedophilia, were discovered and began circulating online.

“Comic fans [that I know] in Korea are quite sensitive about these kinds of issues and consider [even making such remarks] to be on par with actually committing the crime. Above all, Gunn’s remarks go against the family values stressed by Disney,” Kim said. “So, they still aren’t sure whether they should attend this year’s edition of Comic Con, even after paying for the three-day ticket,” she said on the event’s opening day.

All in all, Seoul’s second Comic Con wrapped up with more favorable reviews from attendants. The success was largely attributed to the enthusiastic cosplayers in attendence, who made the spectacle much more entertaining and visually appealing to even those who aren’t fervent fans of comic books and movies.

“Last year, we focused on letting people know about a new pop culture event that didn’t focus on Japanese anime, which is what most comic fairs in Korea are focused on,” said a representative from Comic Con Seoul.

“This year, we spent more effort on expanding the content to games [in order] to satisfy more local attendees, who were quite disappointed by last year’s Comic Con for focusing on superhero comics too much.”

The representative added, “Next year, we will try harder to invite more Hollywood stars to visit Seoul for the event.”

Starting next year, Comic Con will be held twice a year: in Busan and Seoul. Comic Con in Busan will take place in February.