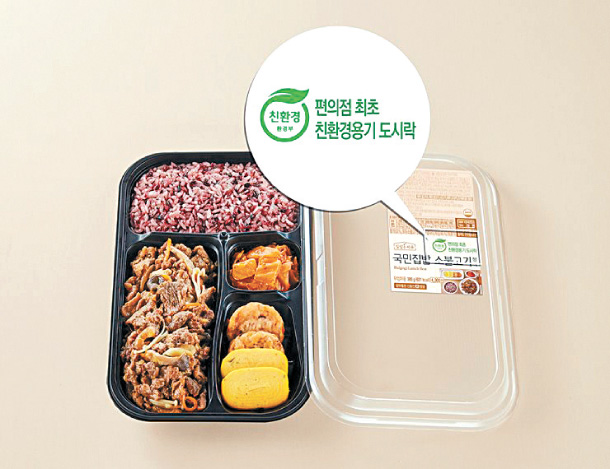 Convenience store chains CU and GS25 announced Sunday that they will roll out dosirak, or lunch boxes, with eco-friendly packaging in line with the ongoing national drive to reduce plastic waste.

CU will be the first convenience store to introduce the eco-friendly dosirak packaging. Its first batch of products will go on sale this Wednesday.

BGF Retail, the convenience store chain’s parent company, explained in a statement that the new packaging uses 40 percent less plastic by replacing it with a biomass material based on coconut skin. This speeds up the decomposition process of the boxes.

“The eco-friendly packages cost 20 to 30 percent more than the ones we use now, but the company decided to use them in order to live up to our corporate responsibility in line with the national agenda of protecting the environment,” said BGF.

GS25’s eco-friendly dosirak will use a different material: bio-based polypropylene.

According to the company, the new package reduces each dosirak’s plastic content by 40 percent and will cut decomposition time in half.

The material is environmentally friendlier as well, as it does not produce residue after it is incinerated. GS said the new packages will cost the company 60 percent more.

“The amount of dosirak packages sold last year was enough to cover approximately 1,460 soccer fields when spread out,” GS Retail said in a statement. “The new versions will push down plastic usage by 40 percent, which means if calculated in the same way, it will cut about 580 soccer fields worth of plastic.”

The new packaging will first be used with some of the new dosirak releases that GS is set to launch next week. These products will also come with wooden spoons instead of plastic ones.

Both companies aim to completely switch all of their dosirak packages to eco-friendly variants by next year.

The government declared war against plastic in May when it announced its aim of cutting plastic waste to half its current amount by the year 2030. In April, China changed its rules on imports of recyclables.

Private recycling companies, whose main clients were in China, said they will no longer collect plastic waste that costs more money or time to recycle, such as waste that contains food residue or has stickers attached to them. Starting this month, the Korean government banned all the use of disposable cups at coffee shops for customers drinking within the shop.

Convenience stores also came up with ways to encourage consumers to properly organize their plastic waste as to increase the likelihood of them getting collected by private recyclable companies.

CU said Sunday that it will expand its application of stickerless labels and begin using labels that easily separate when they are exposed to water. Some of GS25’s in-house beverages contain labels with perforated lines that make packaging easy to remove and make them easier to recycle.

Last month, 7-Eleven removed the logos and barcode numbers from its disposable plastic ice cups to make them easier to recycle.