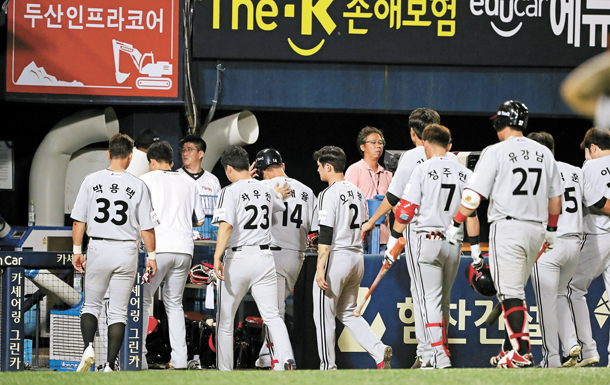 The LG Twins walk back to the dugout after losing 5-6 to the Doosan Bears at Jamsil Baseball Stadium in southern Seoul on Aug. 2. [NEWS1]

There’s an old adage in Korean baseball that the Samsung Lions perform better the hotter it gets. Apparently, the LG Twins get worse.

The LG Twins are starting to struggle as the KBO nears the Asian Games break, losing five consecutive games and looking increasingly like they might miss out on a spot in the postseason.

Although the Twins are still clinging onto fourth place, their performance in the second half of the season alone would put them at the bottom of the table with five wins and 12 losses. Having lost the last five consecutive games, the team’s grip on fourth place is tentative at best. The fifth-ranked Nexen Heroes are only 1.5 games behind them.

Just behind the Heroes, the Samsung Lions are getting ready to pounce. The Lions have been on a roll in the second half of the season, climbing up the table to just two games behind the Twins, with the Kia Tigers trailing by three.

Back in June, the Twins were competing for the runner-up spot with the Hanwha Eagles and the SK Wyverns. But July is a different story - the Twins haven’t made a single move in the standing and now sit six games behind the Eagles and eight behind the Wyverns.

Last season, the Twins had the strongest mound in the league, topping the KBO in ERA at 4.30. Despite the strong pitchers, the Twins still failed to advance to the postseason due to the comparatively weak batters, finishing sixth with 69 wins, three ties and 72 losses.

But this season, with the signing of Kim Hyun-soo and the improvement of the young batters, the Twins are ranked second in terms of batting average, at .299. Though the batters are making more hits and getting on base a lot more than they used to, they are struggling to bring the batters back home to add runs.

In the Twins’ five recent games, they’ve made 57 hits but only scored 20 runs.

As the batters struggle to score, the pitchers have also started to feel the heat. Up until the month of June, the Twins’ starting rotation - Henry Sosa, Tyler Wilson, Cha Woo-chan, Im Chan-kyu and Kim Dae-hyun - was ranked second in ERA and innings pitched.

Remarkably, all five starting pitchers began to struggle as soon as July began. Both foreign pitchers gave up seven runs in their most recent games and the domestic pitchers are faring just as badly.

Cha, who returned from a hip injury on Saturday, gave up eight runs in four innings against the Wyverns while Im has picked up three straight losses.

Kim hasn’t picked up a win for more than three months. The Twins’ bullpen continues to struggle as well. Jin Hae-soo, who topped the league in holds last year at 24, has a 7.26 ERA in 46 games.

As Twins manager Ryu Joong-il has only been assigning Park Yong-taik as a designated hitter, the team’s other starting fielders are starting to struggle under the heat every day.

“I’m not considering Park Yong-taik to start as an outfielder,” said Ryu.

In addition, the Twins are once again missing their foreign outfielder, Adonis Garcia, with an injury. With a batting average of .381 with seven home runs and 28 RBIs in 35 games this season, Garcia was expected to be the leading batter in the Twins’ lineup, but he hasn’t been appearing consistently due to injury.

Starting today, the Twins will play a two-game series against the Lotte Giants in Ulsan.