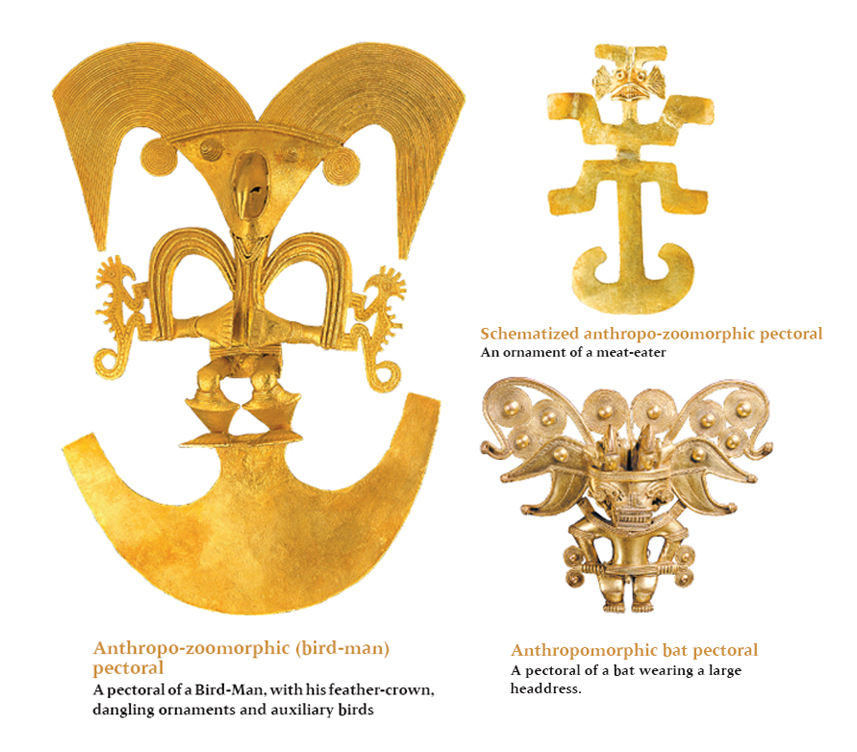 Top: Anthropomorphic jar (Canastero): This jar looks like a canastero, which translates to basket-maker in English. Above: Lime container in fruit shape (Poporo) : Lime containers from Colombia, known as poporos, were often cast in gold. [NATIONAL MUSEUM OF KOREA]

El Dorado, a Spanish word that translates to The Golden One, was long thought to have been a mythical city made of shimmering gold. Numerous explorers went on expeditions to discover this legendary city without any success, and El Dorado has remained an unsolved mystery for centuries.

In 1969, with the discovery of the Muisca Raft in a cave near Pasca, Colombia, it was revealed that El Dorado was not an actual city, but rather a man whose body was covered in gold. As the tribal chief of the Muisca native people, this man covered himself entirely in gold dust and stood on a raft in the middle of Lake Guatavita as a sacrifice.

This marks the museum’s first special exhibition about a South American civilization in six years, after the successful runs of “The Great Myth and Mystery of Peruvian Civilization INCA” in 2009 and “Maya 2012” in 2012.

This exhibition, put together in collaboration with the Gold Museum of Colombia, consists of 322 treasures, ranging from gold jewelry to funerary urns that were used by the indigenous people of Colombia. The exhibit will travel south and be on display at the Gimhae National Museum in South Gyeongsang from Nov. 27 to March 3. A special exhibition of Korean cultural assets will be held at the Gold Museum of Colombia in 2020.

By presenting Colombia’s treasures to Korea for the first time, the museum plans on showing the history and culture of Colombia as well as depicting the adventurous path to a golden civilization, which went through the Amazon River and beyond the Andes Mountains.

The exhibition is divided into four parts: “The Revival of El Dorado,” “Assimilation with Nature,” “Transformation to Shaman” and “Encountering God.”

Along with these four sections, the museum also provides an epilogue that portrays pictures and videos of present day Colombia, which was the sole country in South America to participate in the Korean War.

The first part of the exhibition leads the audience to the land of El Dorado through a media podcast that depicts the story of those who wanted to claim the gold, those who wanted to protect it and those who made sacrifices to gods by throwing gold into Lake Guatavita.

“This is the first time that the National Museum of Korea has used a media podcast,” said curator Oh Se-eun. 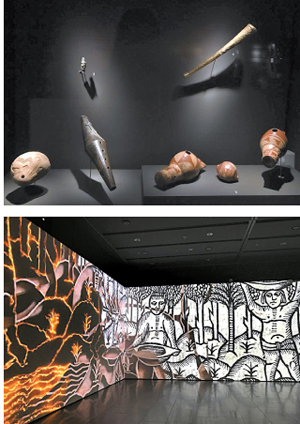 Top: Musical instruments: Instruments, such as ceramic flutes, were important, as ancient Colombians believed that music and dance could clean the mind and soul, and cure illnesses as well. Above: Media podcast: Designed by artist director Kim Hyun-su, this media podcast is the first of its kind created by the National Museum of Korea. [LEE JEONG-HYUN]

The second part of the exhibit shows the lives of the native people of Colombia who associated themselves as an integral part of nature through animal ornaments and household goods, including gold birds, jaguars, frogs, conches and lizards.

The third section presents the vitality of the Muisca shamans, who defeated the evil spirits within the indigenous communities of Colombia and supervised the weather by using various golden ornaments that were used in religious ceremonies and ancient rites.

Shamans, who could freely enter the spiritual world and guided chieftains to the gods, transformed into birds by wearing bird masks, decorating themselves with birds’ feathers and paint.

The final section of the vast exhibition displays various golden ornaments, tattooing tools used by the shamans, golden dolls that were dedicated to the gods and funerary goods.

“In this area [of the world] which considered stone more valuable than gold, gold was not used to fulfil human greed,” said Oh. “Rather, gold was merely a tool used to devote one’s soul to God.”