President Moon Jae-in on Monday called on his top aides to roll out measures that could ease the public of the burden of the utility bill from the month of July, during which an unprecedented heat wave struck the country and forced Koreans to run their air conditioners constantly, jacking up the numbers on their energy meters. 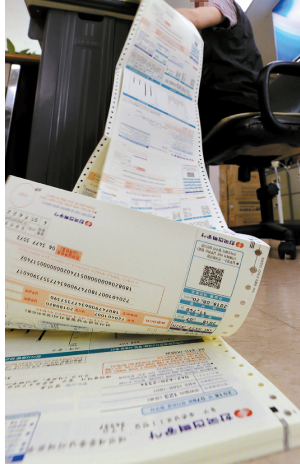 In a secretariat meeting at the Blue House on Monday, Moon ordered senior government officials to determine ways to relieve the burden of electricity costs, including an option to temporarily change the electricity pricing system.

The president also said such measures must be reflected in electricity bills from July.

Moon’s remarks on Monday came in response to the recent outcry from the public who are concerned about the hefty utility bills expected on their doorsteps sometime in the next week or so.

Over 700 petitions related to electricity costs have been made to the Blue House as of Monday.

“We need to establish fundamental countermeasures against the heat wave by considering it a type of natural disaster that could occur regularly each year,” Moon said. “This should be seen as a matter directly related to public welfare and the people should not be kept away from operating air conditioners out of concerns over the cost of electricity.”

An option that the Ministry of Trade, Industry and Energy is reportedly mulling right now is altering the pricing structure for the July bill, which charges incremental rates depending on the amount of electricity consumed.

The Korea Electric Power Corporation (Kepco), the state-run utility firm who has a monopoly over the electricity supply in the country, charges three different rates on regular households - 93.3 won ($0.08) from 1 to 200 kilowatt hours, 187.9 won from 201 to 400 kilowatt hours and 280.6 won for each kilowatt hour over 400.

Kepco explains that a four-member household consumes about 350 kilowatt hours of electricity per month and runs air conditioners about three and half an hours on average. If this household has air conditioners on 10 hours longer than average, it would end up paying as much as 170,000 won more, according to Kepco’s estimate. 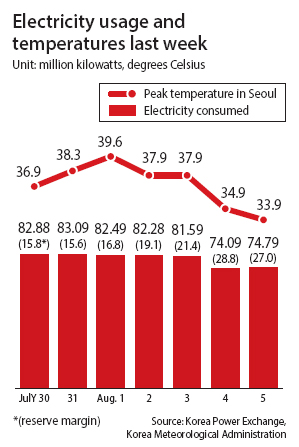 A likely option for the government is temporarily raising the maximum amount of electricity that gets charged 187.9 won per kilowatt to over 400 for the month. In addition, it is reviewing the option of providing a tax rebate on the 10 percent value-added tax charged on the bill.

According to Kim Boo-kyum, minister of the interior and safety, Monday morning, the Energy Ministry reported to other government agencies that it is currently in the final stage of deciding which of the two options to implement.

“It is on our agenda right now, and the company is discussing this matter with the Energy Ministry,” said an official from Kepco, unable to provide further details.

During Monday’s meeting, Moon also hinted at the possibility of the government overhauling the pricing system.

The current system has been under constant public scrutiny because only electricity for residential use, which takes up about 13 percent of the energy demand in the country, is subject to the incremental rating system. For industrial use, accounting for over 55 percent of the total demand, the price of electricity differs depending on the season while the difference between charged rates stands at around 20 won.

Neighboring Japan also charges three different rates based on the amount consumed, although the difference between the rates is less than 6 yen, or about $0.05, according to Tokyo Electric Power Company Holdings.

The Korean government reformed the system in 2016. Before then, it charged six different rates for residential electricity depending on consumption.

“There is rising public sentiment asking for the improvement or abolition of the incremental rate system for residential electricity,” Moon said. “[The government must] inform the public of the standard of our country’s electricity cost and the system compared to those of other countries and review possible improving measures by listening to public opinion.”

As the temperature in Korea reached a historic high last week, the electricity demand also went through the roof. On Aug. 1, when the high temperature in Seoul was recorded as 39.6 degrees Celsius, a record for the city, the total energy demand in Korea stood at 82.49 million kilowatts, according to the Korea Power Exchange. The government expects the demand to reach its seasonal peak in the second and third week of this month.