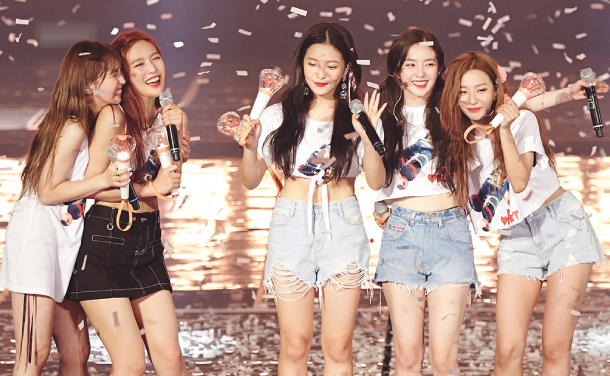 Summer is at its peak, and so is Red Velvet. The popular idol group held their second solo concert series over the weekend and revealed new songs off of their “Summer Magic” EP to fans and local press prior to the album’s official release Monday evening. A total of 10,000 fans attended the two-day concert, selling out the SK Olympic Handball Gymnasium in Olympic Park, eastern Seoul.

“We thank everyone for coming to our second concert,” said Irene, leader of Red Velvet, in a press meeting held before the show on Sunday. “The lead track of the mini album is ‘Power Up,’ and it’s a song that you can all sing along to. If [the previous summer song] ‘Red Flavor’ was upbeat from the very beginning, this is something that takes a little more time to stick. I was like, ‘What?’ at first when I heard it, but I became really interested in it and it made me keep listening.”

“I really like our ‘Red Flavor’ album, so it’s true we felt a certain kind of pressure for this album,” said Joy. “But despite that, we’re confident that ‘Power Up’ is a good song.”

The concert was welcomed by fans, who had been waiting since last August to see the group perform again. Since Saturday was the first time for “Power Up” and other songs off of the new EP to be heard outside the studio, the concert felt like more than just a performance for the group, according to member Yeri.

“We performed ‘Power Up’ for the first time at the concert on Saturday,” said Yeri, the youngest of the group. “I was so nervous. Many of the [new] songs have to be performed together with choreography, which we prepared a lot for. I think that this concert is special because we’re showing our songs [to fans] beforehand.”

“Power Up” is an upbeat pop song that has a lively summer vibe, with a “seize the day” message throughout. “We went to a company workshop and Lee Soo-man [executive producer of SM Entertainment] told us, ‘You have to enjoy yourself whether you are playing or working.’ We have that line in our lyrics,” said Seulgi.

The concert told a story based on a theme park, where the five girls were taken to after being abducted by a mysterious robot character named Reve. The members started off the concert by jumping out of a door and wondering out loud, “Where are we?” The robot’s name came from Yeri, who thought of the word during a meeting. “When I looked up in the dictionary, I found that ‘Reve’ means fantasy and dream in French,” said Yeri. “It’s also similar to our fan club, ‘ReVeluv.’”

“We’re very grateful that we can hold a concert,” said Seulgi. “I think it comes with a certain responsibility. We have to think about things like, ‘How are we going to give a better performance?’ But at the end of the day, I think our fans will go back satisfied and filled with energy if we have fun on stage.”

The group celebrated its fourth anniversary on July 28 - an anniversary which leader Irene thanked their fans for. “Time passed so quickly, partly because we’ve had a lot of albums out. We’ve been loved by so many of our fans. The fact that we could hold a concert is because we have a lot of people waiting to see us. We’re always very grateful for that,” said Irene.