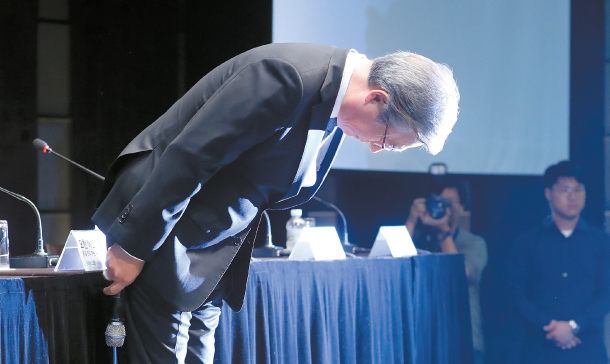 BMW Korea Chairman Kim Hyo-joon bows in apology to the public for the recent spate of vehicles bursting into flames during a press conference that was held at the Westin Chosun Hotel in downtown Seoul, Monday. [YONHAP]

BMW Korea Chair Kim Hyo-joon bowed his head in apology on Monday at an emergency press briefing as the automaker struggles to respond to its critics amid a delayed recall announcement and a growing pile of burnt-out cars.

A team from the German headquarters joined the press event, playing down rising speculation here that there might be more to the fires than just the faulty EGR components that BMW Korea has been claiming. More than 30 BMWs have burst into flames in Korea this year.

“I want to apologize to BMW owners who have been affected by the latest fire incidents as well as to those who don’t own BMW vehicles for causing this social issue,” Kim said in an emergency briefing held Monday in central Seoul.

“The headquarters is taking the issue seriously and sharing related information on a daily basis to solve the problem as soon as possible,” he added.

Kim and the researchers from the German headquarters reaffirmed that a leakage of coolant from the EGR cooler and accumulated sediment within the system are the root causes of the fires that have torn through BMWs across Korea.

When coolant leaks from the EGR cooler, explained Johann Ebenbichler, vice president of BMW’s corporate quality team, gas emissions from the engine are too hot when they meet the accumulated sediment in the EGR pipe. The sediment combusts, causing the engine to burst into flames.

The fires can only start when the car is on the road, not when it is parked, he added. 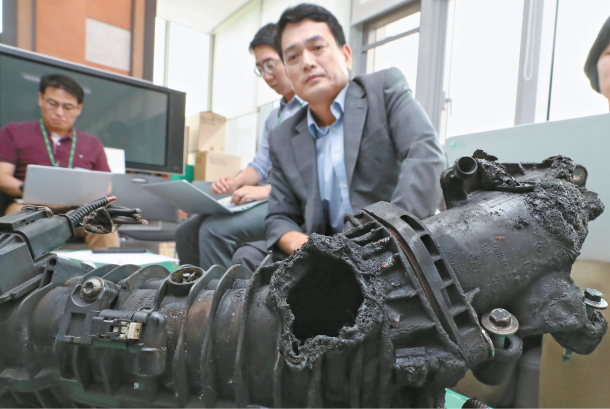 A BMW diesel-engine EGR with a massive hole after a meltdown is displayed at the Ministry of Land, Infrastructure and Transport office in Sejong on Monday. [YONHAP]

“We would like to make it clear that the root cause is only a hardware issue,” said the vice president after a 30-minute presentation on the cause of the fire.

Regarding speculation that the German auto company equipped faulty components to vehicles that are specifically exported to Korea, Ebenbichler said that BMW uses the same EGR system for all cars sold worldwide.

He added that BMW cars sold on the Korean market use the same software that’s equipped in cars for the EU market. There’s an exception for the American market though, he said.

According to BMW, 0.1 percent of diesel cars sold in Korea have had faulty EGRs, which actually falls short of the 0.12 percent global average. The automaker was referring to any fault in the EGR, not necessarily ones that would cause the car to burst into flames.

The German company also said that it came to a conclusion about the cause of the fire only in June this year, rebuking speculation that it delayed the recall in Korea until things got out of hand.

The reputation of BMW vehicles has been highly dented due to the latest series of fires. A shortage of after-sales service centers and busy hotlines have also fueled customer frustrations.

Sales of the 520d model which is at the center of the latest fire hazards - as well as being the most popular model in Korea - fell by 45.7 percent in July compared to the previous month.

According to sales data from the Korea Automobile Importers & Distributors Association, BMW Korea sold a total of 523 units of the 520d, coming in fifth place after Audi A6, Volkswagen Tiguan, Mercedes-Benz E 220d and Ford’s Explorer. The 520d was the second most popular model in June, selling 963 units.

Prior to the emergency press briefing Monday, Korea’s Transport Ministry urged the German carmaker to come up with a more detailed report on the cause of the fire, citing that the submitted report is insufficient. The ministry said it will run a separate probe into the fire cases with external experts.

At the end of last week, the Transport Ministry urged BMW owners to keep their vehicles off the road.