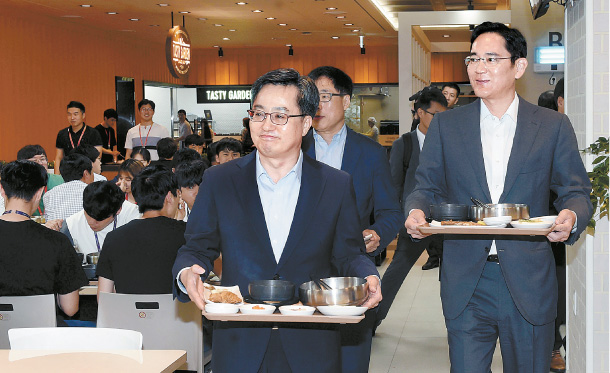 Their conversation centered around four themes - semiconductors, artificial intelligence, 5G connection and bio - as the key framework for Samsung’s growth in the future. Lee used the occasion to ask the government to ease regulations in the bio industry, the minister told reporters after the meeting.

“It’s hard to say in detail for confidentiality reasons, but we discussed several regulations in the bio industry,” Kim said. “[Lee] also made proposals on several issues surrounding electricity at the Pyeongtaek plant and foreign investment.”

The minister added that he promised to tackle some of the proposals, while others require further review.

Vice Chairman Lee in return vowed to beef up support for its business partners in building smart factories. The promise is in line with a decision by Samsung’s board of directors on July 31 to cough up 10 billion won ($8.9 million) each year for five consecutive years to help smaller business partners boost their manufacturing capacity.

The Samsung heir also stressed that the conglomerate would solidify a transparent governance structure and root out “unfair” business practices.

In a press release, the ministry described the occasion as part of a series of on-site meetings between the minister and local businesses for “innovative growth.”

The minister has visited large and small firms as well as start-ups 40 times so far, and last week alone, he visited smaller business operators three times in an effort to “continue communicating with various economic bodies.”

The finance minister’s visit to Samsung was the first since he was inaugurated in June last year. Samsung is the fifth conglomerate he has visited - after LG last December, Hyundai Motor in January, SK in March and Shinsegae in June. Those chaebol came up with hefty investment and job generation plans during the minister’s visit. When combined, the investment promised over the next three to five years hovers above 131 trillion won.

Unlike with other conglomerates, the meeting between Kim and Lee has stirred controversy over the past few weeks.

In mid-July, Vice Chairman Lee met President Moon Jae-in for the first time since the Samsung heir was freed from prison in February, when the president swung by a ceremony to mark the completion of a Samsung smartphone factory in India.

The president asked the Samsung chief to “invest more and generate more jobs” and Samsung has since been preparing to respond to the request.

Sources say Samsung was set to unveil a massive 100 trillion won worth of investment and hiring plans Monday, a perk for the economy that has been showing ever-worsening signals in the past months.

However, Korea’s most valuable conglomerate “tentatively” postponed the plan after some local media reported the Blue House delivered a message to the ministry that the government appearing to “beg” chaebol for investment and hiring isn’t desirable. Samsung says the announcement will be made “imminently.”

Minister Kim subsequently released a statement under his name that reads: “The government has neither the intention nor a plan to increase investment and employment by repeating the methods used by past administrations of relying on conglomerates. Some expressions [from the media] aren’t appropriate and are far from helping out innovative growth and job creation hoped for by the public.”

Insiders cite discord between the Blue House - the chief policy adviser, Jang Ha-sung, to be more exact - and the Finance Ministry as the reason for the recent feud surrounding Samsung. Jang and Kim have already crashed over the “income-led growth policy,” led by the presidential aides, in May.

“The Finance Ministry reacting sensitively to the opinion of the Blue House needs to be refrained from, given it could cause policy-wise confusion,” said Kim Tae-gi, professor of economics at Dankook University.