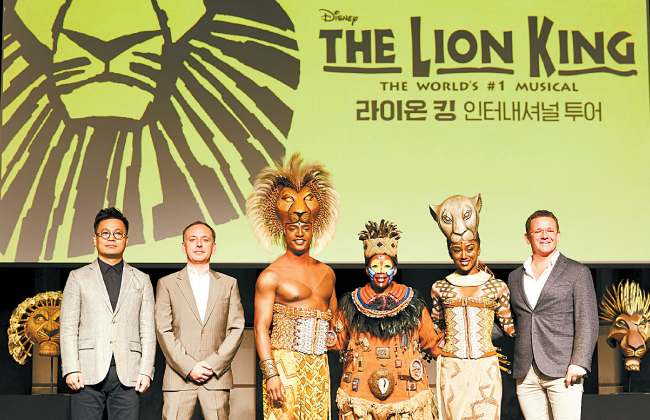 Most Disney classics are loved equally by kids and adults alike, especially “The Lion King.” With music by legendary songwriters Elton John and Tim Rice and a score by Hans Zimmer, it is hard not to sing along with the songs that make the movie so powerful. The musical version of the film, which premiered in 1997, has gone on to become the highest grossing Broadway production of all time.

That is why both “The Lion King” movie fans and the musical aficionados are counting down to Aug. 28, the day tickets go on sale for the musical, which is coming to Korea for the first time this November.

Kicking off its tour at the Keimyung Art Center in Daegu on Nov. 9, the musical will make its way up to Seoul for shows starting on Jan. 10 at the Seoul Arts Center, southern Seoul. Then the tour will end with shows at the Dream Theater in Busan in April.

Before the local premiere, the show’s production team held a press conference at the Grand Ballroom of the Westin Chosun Hotel in central Seoul, and performed previews of some of the musical’s biggest songs. To start things off, actor Ntsepa Pitjeng took the stage in her Rafiki costume and perfectly performed the showstopper “Circle of Life.”

Felipe Gamba, the director of international strategy for the Disney Theatrical Group, explained the significance of Rafiki and her role as the “spiritual center of the play.”

“The idea of creating Rafiki on stage was to base it on the image of shamans, wise women sharing wisdom. The character encompasses the whole notion of Africa in the show,” said Gamba.

When asked for her take on why Rafiki changed from a male to a female character when adapted into the musical, Pitjeng answered, “I would like to think that they just needed a female beautiful voice in there.”

Left: Rafiki, played by Ntsepa Pitjeng, singing “Circle of Life,” the iconic opening number of “The Lion King.” Right: Nala, played by Janique Charles, left, and Simba, played by Jonathan Andrew Hume, in a scene from the musical. [CLIP SERVICE]

Pitjeng explained that the most difficult part of playing Rafiki for her was balancing out the character as both a baboon and also showing its human qualities. Even though the characters are all animals, “it’s a story about people, not animals.”

“It is a coming of age story of Simba, who is still a boy, becoming a grownup,” said Gamba.

Julie Taymor, the director, costume designer and mask co-designer of “The Lion King” musical, made many changes when putting together the musical adaptation. She wanted to strengthen the female point of view with Nala’s character, and to do that, Nala became more of a warrior fighting for her nation.

“The Lion King” is a global phenomenon like no other in the entertainment history, and the international tour was made possible thanks to the Disney Theatrical Productions partnering with Australia-based production company Michael Cassel Group. Gamba explained that it took them “20 years to put together this tour for a couple reasons - they had to find a partner “crazy enough to embark on this [big-scale and challenging] project” and also figure out a way to move the production from one place to another.

“You have to imagine that an international tour of ‘The Lion King’ is a traveling village. There’s over 100 people traveling with the show, and I don’t know how many tons of equipment and scenery, props and costumes, so it’s literally a city that moves around.”

The international tour first stopped in Manila in March, and then Singapore in June. After their tour in Korea, they will head to Taiwan and then wrap up the tour in South Africa.

As to why Korea was chosen as one of the tour destinations, Gamba answered, “We have been excited by Korea’s market for many years. Korea was attractive to us because there’s a really clear appetite for the musical theater genre, and knowledge and desire.”