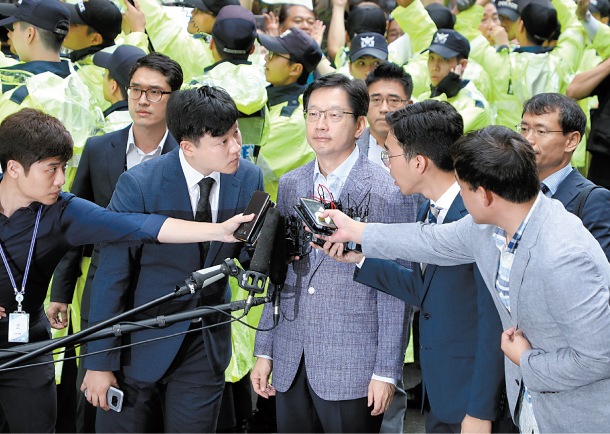 South Gyeongsang Gov. Kim Kyoung-soo takes questions from reporters before entering the office of the independent counsel in southern Seoul on Monday. [YONHAP]

The independent counsel is digging into allegations that the governor conspired with a power blogger, Kim Dong-won, widely known by his online alias Druking, to mount a social media manipulation campaign to generate support for President Moon Jae-in during last year’s elections.

The blogger and his associates would post comments on social media that were favorable toward Moon and used software to artificially inflate the number of “likes” on those comments. At the time, Kim Kyoung-soo was serving as a key aide to Moon, and prosecutors believe he may have promised favors to the group in return for their help.

The questioning lasted late into the evening, and all the testimony was to be recorded on film, according to the special counsel. When asked by reporters that morning how long the inquiry might last, one of the probe’s prosecutors replied that they had a lot of questions for the governor. Depending on the information that surfaces, the special counsel might request an arrest warrant for Kim Kyoung-soo on the grounds that he might attempt to eliminate evidence against him.

Standing outside the independent counsel’s office Monday morning before heading in for questioning, Kim Kyoung-soo denied all allegations forward against him and suggested the investigation is politically motivated.

“I am hoping that the truth of this case will be uncovered,” he said. “I implore the special counsel to commit to revealing the truth rather than promote political conflict.”

Specifically, he denied being present at a meeting in November 2016 where Kim Dong-won and his crew allegedly demonstrated a program called King Crab to him. The software was used in the political influence campaign.

The independent counsel on Sunday said it had completed its analysis of hard drives and flash drives uncovered from earlier raids of suspects in the case, including Kim Dong-won and Kim Kyoung-soo.

The smoking gun is a USB drive that Kim Dong-won submitted to the special counsel on July 18 to refute Kim Kyoung-soo’s defense. The drive contains text messages that the two men exchanged on Jan. 5 of last year, in which the governor asked for information that the blogger had on Korean conglomerates, known as chaebol, because the Moon Jae-in campaign was working on a chaebol reform plan.

“We have in our possession significant evidence that may surprise Gov. Kim,” a source in the special counsel said on the condition of anonymity. “It will be difficult for him to continue to deny the allegations.”

Police officers already questioned Kim Kyoung-soo as a witness on May 4, two months after they arrested Kim Dong-won, but they were unable to implicate him on the opinion rigging allegations.

With their crosshairs fixed on the governor following a slew of arrests of Kim Dong-won’s associates throughout July, the special counsel changed Kim Kyoung-soo’s status from a witness to a suspect on Thursday, shortly before raiding his home and office in Changwon, South Gyeongsang.

The raid, though, failed to uncover additional evidence and left the counsel facing mounting pressure to prove its charges against the governor by the time its mandate expires on Aug. 25.

Bringing the governor in for questioning may invite further criticism against the police, whose own investigation yielded little evidence before handing over the case to the independent counsel in late May.

The counsel’s discovery of material evidence in July from a publishing company run by Kim Dong-won and his crew - a place that police had already searched twice - led to accusations that the police were incompetent or deliberately unwilling to investigate a political figure with close ties to the current administration.

The public’s reaction to Kim Kyoung-soo’s appearance outside the special counsel’s office on Monday testified to the case’s heavy polarizing effect. Shouts of support and insult alike were heard from dozens of supporters and detractors who congregated to witness his appearance. Police formed a barricade to hold the crowd back.

The ruling Democratic Party defended the governor, with its leader, Choo Mi-ae, accusing the special counsel of engaging in publicity stunts and politically humiliating its suspects based on unverified information.