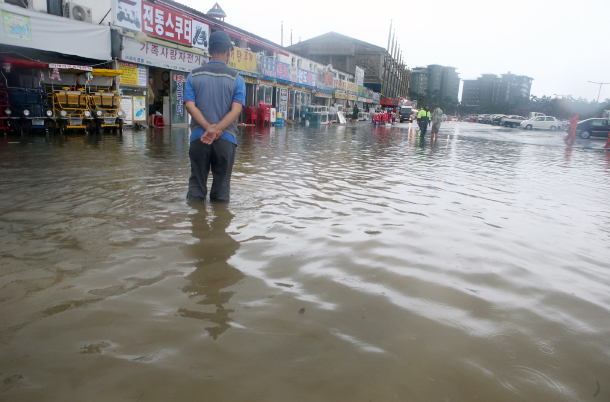 Stores near Gyeongpo Beach in Gangneung, Gangwon, are flooded Monday morning following torrential rainfall in some parts of Gangwon. [YONHAP]

Though most of the country began the week with little relief from the unrelenting heat wave, some parts of Gangwon, a popular summer vacation destination, were hit with torrential downpours early on Monday.

It rained 93 millimeters (3.7 inches) from 3 a.m. to 4 a.m. on Monday in Gangneung, Gangwon, according to the Korea Meteorological Administration (KMA).

This was the second-highest hourly rainfall recorded in the city behind the 100.5 millimeters per hour that fell on Aug. 31, 2002, when Typhoon Rusa hit.

More than 20 roads and public facilities and about 40 houses in Gangneung were flooded Monday morning, including Gangneung Station, which was frequented by visitors during the PyeongChang Winter Olympics last winter. Officials spent Monday morning pumping water out of the station.

No injuries were reported due to the rain and flooding as of Monday afternoon.

Most of the rainfall in Gangwon thinned out by the afternoon, though the KMA said it expected about 50 millimeters of rain to fall in the coastal areas of the province on Monday night.

The recent heat wave continued to affect other parts of the country. The KMA on Monday issued heat wave warnings for Seoul, Sejong, Daegu, Gwangju, Daejeon, Incheon, all of the Gyeongsang, Chungcheong and Jeolla regions and some other areas in Gangwon, including Hoengseong County, Chuncheon, Hwacheon County, Cheorwon County, Wonju and Yeongwol County.

The number of people getting sick from heat hit a record high this summer. The Korea Centers for Disease Control and Prevention (KDCD) said that 3,057 people got sick from the heat from May 20 up until Saturday and 38 died from heat-related illnesses.

Temperatures hit record numbers this summer. The high in Seoul on Aug. 1 was 39.6 degrees Celsius, the highest since records started being kept in 1907, according to the KMA.

The KCDC warned to people to “stay away from direct sunlight outdoors, including at parks and beaches, and refrain from outdoor activities including construction work during heat waves,” in a statement last week.

“Keep hydrated and stay away from prolonged outdoor activities during the summer vacation season,” the KCDC said in its statement.