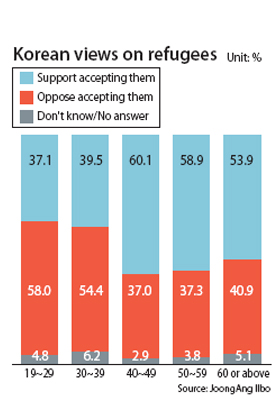 In contrast to the United States and many countries in Europe, where the younger generation tends to be more accepting of refugees, results from a JoongAng Ilbo survey released on Sunday showed the opposite in Korea: Older age groups were more welcoming of refugees.

The country remains starkly divided on how to handle more than 500 Yemenis who arrived on Jeju Island earlier this year seeking asylum from civil war, taking advantage of a visa-free program on the resort island. Younger women in particular expressed the most concern about refugees in the survey.

The poll had a margin of error of plus or minus 3.1 percentage points with a 95 percent confidence level.

Kim Dae-keun, a research fellow at the Korean Institute of Criminology, theorized that more younger women were hostile to refugees because most of the Yemeni asylum seekers are men. On why young adults were more opposed than older adults, Kim said the concern was about jobs.

Hostility toward refugees increased when asked about how they felt about Muslim asylum seekers, with 66.6 percent of respondents saying they were against them; 73.9 percent of women felt so versus 59.1 percent of men.

On whether Jeju needed to embrace the more than 500 Yemeni asylum seekers on the island, 61.1 percent answered no, and 27.3 percent of those people said they were very opposed to the idea.

Only 35.8 percent of respondents said they were optimistic about them living on the island, with 4.9 percent of them saying they highly supported their stay.

The reasons why Koreans opposed refugees varied. More than half (55.4 percent) of those who were against them cited public safety concerns about possible crime and terrorism; 18.3 percent cited differences in religion and culture; and 15.8 percent said they were worried about the social costs such as higher taxes.

Koreans who welcomed refugees said they did because the country would gain a better reputation in the international community (63 percent), diversity would strengthen Korea’s competitiveness (16.2 percent) and refugees would help domestic industries that lack labor (16.2 percent).