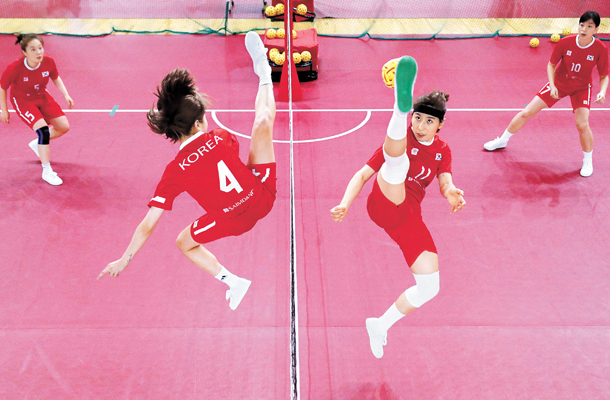 Sepak takraw, much like curling eight months ago, is a sport that few Koreans have heard of. The popular Southeast Asian game - sort of like volleyball but played with feet and a small rattan ball - never really found much popularity outside of Malaysia, Thailand and the surrounding area. That may be all about to change as Korea’s women’s team are confident they can take home the sepak takraw gold at the 2018 Asian Games.

Sepak takraw, sometimes known as kick volleyball, gets its name from a combination of Malay and Thai. Sepak is the Malay word for kick, while takraw is a Thai word meaning a woven ball.

Much like volleyball, the ultimate aim of the game is to get the ball to touch the ground on your opponent’s side of the net. Teams can touch the ball up to three times before it has to go over the net, but the second the 6-ounce ball hits the ground, the point is lost.

Players are only allowed to touch the ball with their feet, knees, chest and head. A well placed sepak takraw kick can exceed 60 miles per hour.

The sport was first introduced to Korea in 1987. Korea even took home a gold medal at the 2002 Asian Games in Busan, winning the men’s circle sepak takraw event. The circle version of the game is played without a net and involves players attempting to pass to their teammates while ensuring the ball crosses the center of the circle. This confusing variation is no longer played at the Games.

At the Jakarta Palembang 2018 Asian Games there are a total of six gold medals - four men’s events and two women’s - up for grabs in sepak takraw. Korea will compete in all of the events.

The 12 players on the Korean women’s team are currently training at the Jincheon National Training Center in Jincheon, North Chungcheong. They hope to win the country’s first ever gold in the women’s team event.

“It has a different meaning this time,” said Kim Dong-hee, who is competing at the Games for the third time. “We are working really hard to win a gold medal.”

During the 2014 Asian Games in Incheon, the women’s team won silver in the women’s regu category, a three-by-three event.

Continuing their success, the women’s team won the country’s first ever gold in regu at the 2017 King’s Cup Sepaktakraw World Championship in December, defeating the 2014 Asian Games gold medalist Myanmar in the final.

“We won another silver medal at an international event in Thailand this year after a short period of time training together,” said Kim Hee-jin, another member of the team. “Unlike the other Asian teams, the Korean women’s team has its own family-like environment and our strong teamwork comes from that comfortable atmosphere. That’s our strength.”

In women’s sepak takraw events, the net is 4.7 feet off the ground. As players have to kick the ball over the net, height and long legs are important. But the Korean team thinks that variety is their greatest strength.

“On our team, we have a mix of tall and short players,” said team member Lee Min-ju. “[When we compete at international tournaments,] we hear people say ‘it looks like gymnasts and basketball players are playing together.’ Since we have a variety of players on our team, we are like the avengers of sepak takraw.”

The majority of the players on the Korean women’s team started playing the sport in middle or high school. Lee Min-ju started playing sepak takraw in seventh grade when her school introduced the sport. At the time, Lee played for her school’s track and field team. Kim Dong-hee, who does not come from an athletic background, started the sport in 10th grade as she attended a high school with a sepak takraw team.

Although it’s not a familiar sport in Korea, the national team still had to work very hard to represent the country.

“The ball is really hard. Since we practice thousands of receives a day, we have bruises on our legs and our back,” said team member Kim I-seul.

Despite the recent international success, the sport is still almost unheard of amongst Koreans. Currently, there are just eight high schools with women’s sepak takraw teams and seven amateur teams in Korea. Through the Asian Games this year, the women’s team hopes to popularize the sport in Korea, just like how curling juggernaut Team Kim’s success at the 2018 PyeongChang Olympics boosted the icy sport’s popularity here.

But the route to gold won’t be easy. Korea will have to beat Thailand, giants of the sepak takraw world. Thailand has won 10 of 15 gold medals in women’s sepak takraw at previous Asian Games.

“We never won against Thailand at an international tournament [in a team event],” said Lee Min-ju. “This time, we really want to win.”