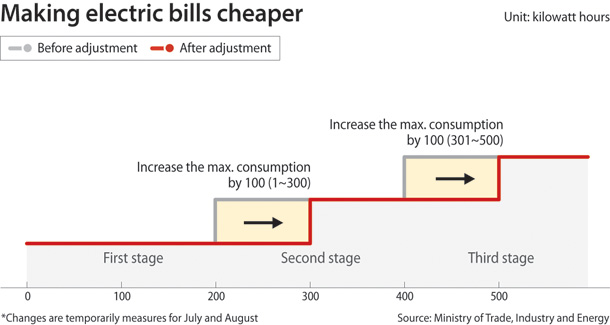 The government on Tuesday decided to bring down home electric bills for July and August after a heat wave forced people to run air conditioners more than in previous years - or to suffer without it out of fear of the cost.

At a meeting at the National Assembly Tuesday morning, the ruling Democratic Party and the Ministry of Trade, Industry and Energy decided to temporarily adjust the charges for residential electricity in Korea by expanding the power usage levels for the two lowest pricing tiers.

“This will decrease the electricity cost by 19.5 percent [or 10,370 won] per household on average,” said Paik Un-gyu, the energy minister during a briefing later in the day at the Seoul government complex. “In total, we believe the total size [of the electric bill cuts] will be about 276.1 billion won.”

Strangely, the government claims that electric bills for the vast majority of people in Korea weren’t significantly higher this summer even before Tuesday’s decision - but decided to intervene to allay fears of large bills for August.

Paik said that, according to an analysis done by the Energy Ministry and Korea Electric Power Corporation (Kepco), the state-run energy company with the monopoly in Korea for electricity supply, 89 percent of some 4.2 million households in Korea saw their electric bills increase in July by less than 10,000 won or even decrease, while only one percent saw a significant jump of over 50,000 won.

“The number of heat wave days this year was twice as many as last year, but the electricity charge has barely changed for many people,” Paik said. “The government believes this is because many people were unable to turn air conditioners on as much as they wanted to due to concerns about the cost.”

The measures were announced a day after President Moon Jae-in ordered senior aides to help the public cope with July electric bills. As of Tuesday, nearly 800 petitions regarding the issue were filed to the Blue House.

The government will also provide aid to households considered more vulnerable to the weather, including families with young children.

Paik explained that the Energy Ministry and Kepco will expand the amount of discounts to qualifying households in Korea. About three million households, including ones with disabled family members or very modest incomes, benefit from this policy.

For families with infants, the government will provide discounts on electric bills for the next three years, Paik added. Previously, the government assistance lasted for one year.

This is not the first time that the government has decided to get involved in electricity charges.

In 2016, the Park Geun-hye administration implemented similar measures for the months of July to September.

The energy minister also hinted that the government may overhaul the current electric pricing system, which has been the subject of debate for years because Kepco only charges progressive rates based on the amount of consumption for residential electricity.

Paik said the government will consider applying a system in which different rates are charged depending on the time of the day and the season of the year, as Kepco does for industrial electricity.

For instance, Kepco charges certain companies 59.2 won per kilowatt hour during spring and fall and 81.0 won for summer.

“It’s true that there is a gap between the rates charged for residential electricity and for industrial electricity,” said Paik. “We are discussing this matter with the National Assembly and will continue to do so before reforming the electricity pricing system.”

While the measures announced Tuesday are good news for the general public, Kepco will obviously pay a price.

On Tuesday, the price of Kepco’s share shed 1.93 percent compared to the previous session to hit 30,450 won.

In the past few trading days, Kepco’s market capitalization plummeted by more than a trillion won due to a number of factors.

Its shares fell for two straight days from Aug. 1 to 2 after news broke out on July 31 that the company lost its preferred bidder status for a major nuclear project in Britain.

Investor sentiment about the utility firm worsened after concerns spread that Kepco would end up bearing the cost of the government lowering electricity charges.