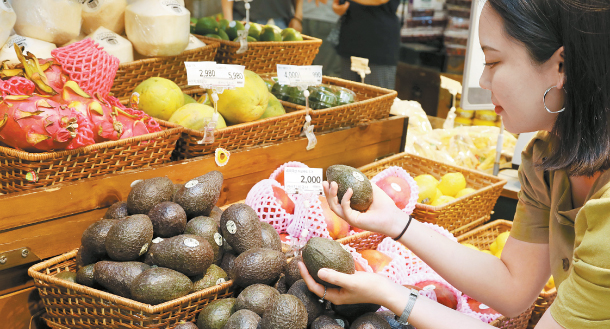 A shopper at discount chain Emart chooses from a stack of avocados. [EMART]

It’s the summer of the avocado in Korea, and the rich green fruit is showing up on many more menus and even in beverages. 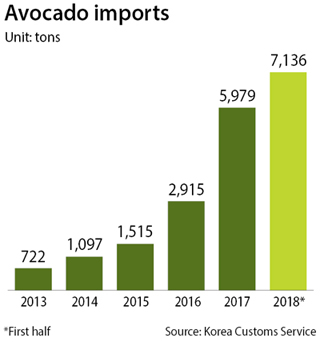 “Avocados contain minerals, vitamins and many other beneficial nutrients, making them a suitable alternative for meals,” the company said. “They also have little sugar and a soft texture, which make it a good ingredient to match with other fruits or to apply on new desserts.”

In late June, Starbucks Korea started offering the Avocado Blended as one of its summer specials. The drink, developed by the company’s Korean headquarters, blends avocado with milk and is topped with an orange-colored round chocolate, which is supposed to represent the fruit’s pit.

In its first month on the menu, over 500,000 Avocado Blendeds were sold, which Starbucks says was twice its own estimate.

“We’ve been seeing a steady demand for drinks with fruits like banana, and our menu development team said they got the hint from that,” said a company spokesman. “Avocado is a healthy and filling fruit, so they thought fans of our Banana Blended would enjoy this, too.”

Local beverage chain Juicy was an early adapter of the avocado. It started offering two avocado drinks last year, which have become steady sellers at branches nationwide. Both are on the chain’s list of its 15 best-selling products. This year, it added two more avocado-based drinks.

Sandwich franchise Subway’s three Avocado Series offerings - Veggie, Turkey bacon and Spicy Italian avocado - were introduced in May and became huge hits. The chain sold 420,000 units in the first 78 days after their introduction.

Koreans have been introduced to avocados by restaurants specializing in brunch, Mexican eateries or by traveling overseas.

Kim You-jung and her husband opened a Mexican restaurant in Seoul in 2010.

“When we first started the business, 80 percent of the customers asked us what an avocado was,” she recalled. “As years went by, more customers asked for avocado dishes first. After our sales rose, we expanded our lineup of avocado-based dishes as an experiment in 2014. In six months, there were regular customers coming repeatedly to order those dishes.”

In April, she and her husband launched a restaurant specializing in avocados, Hola Avo, in Dongjak District, southern Seoul.

Another advantage of the fruit, she says, is that it’s pretty, making it “Insta-friendly,” or good for posting on Instagram. Kim doesn’t think the demand for avocado will be short-lived.

“One thing I’ve noticed by selling avocado dishes over the last eight years is that it’s part of a larger tendency to eat healthy and increase your vegetable intake,” she added. “Around the time avocado sales began going up a few years ago, salads became popular, too.”

The popularity of the fruit is evident in discount chains, too. At Emart, avocado sales shot up 25.9 percent between January and June year on year. Government statistics show that avocado imports to the country reached 5,979 tons last year, up tenfold compared to 457 tons in 2010.

“Avocados have been frequently appearing on television as celebrities eat or cook with them,” said an Emart spokesman. “Restaurants have been actively developing dishes, and the trend to upload pretty food pictures on social media also seems to have influenced its popularity.”