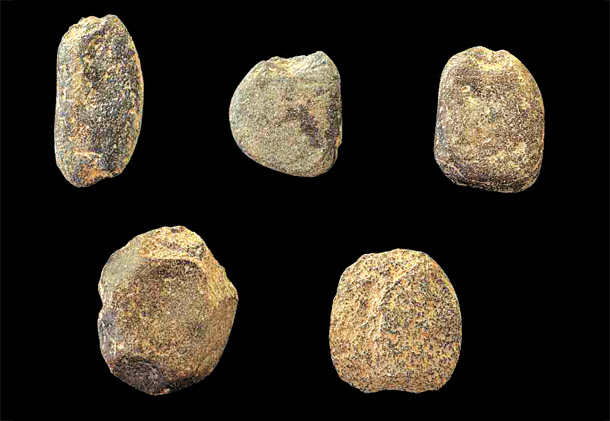 This photo, released by the Yonsei University Museum on Tuesday, shows several 29,000-year-old fishing net sinkers excavated from a cave in Jeongseon County, Gangwon. They are considered to be the world’s oldest. [YONHAP]

Archeologists have unearthed 14 fishing net sinkers considered to be the oldest in the world - at least 28,000 years old - in Jeongseon County, Gangwon, the Yonsei University Museum announced on Tuesday.

The fishing net sinkers made of limestone represent a rare discovery of fishing gear from the Upper Paleolithic era or Upper Old Stone Age.

The sinkers were unearthed during an excavation of four cultural phases from the Paleolithic era at the Maedun Cave in Jeongseon County, Gangwon.

Researchers at the Korea Institute of Geoscience and Mineral Resources have identified their ages as ranging from 28,550 to 29,460 years through radiocarbon dating of charcoal contained in the lower part of the third cultural phase.

“If the figures are found to be correct, the net sinkers from the Maedun Cave are the earliest relics in the fishing history of mankind,” a museum official said.