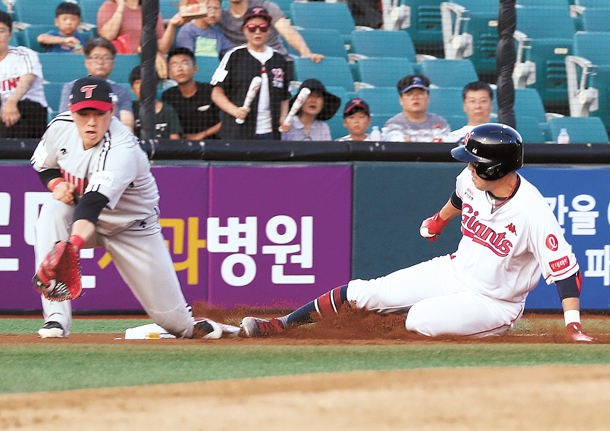 Jeon Jun-woo of the Lotte Giants, right, slides to third base during a game against the LG Twins at Ulsan Munsu Baseball Stadium on Tuesday. [NEWS1]

Eleven years after signing with the Lotte Giants, Jeon Jun-woo is having the best season of his career.

Jeon has always been considered a solid player. He was a starter for the Giants for years and came close to joining the 20-20 club, players with 20 home runs and 20 stolen bases in one season. Although he wasn’t good enough to earn a spot on the national team, Jeon was a popular member of the Giants lineup, at least until 2014.

After the 2014 season, Jeon left for his military service. Upon his return in 2016, Jeon’s performance dropped dramatically - he finished out the 2016 season with a batting average of .253 in 25 games.

“In previous [seasons], I struggled to get back once I lost my balance in batting,” Jeon said.

Rather than rushing, Jeon taught himself to be more patient. This season, he has taken the time to improve his accuracy with spectacular results. As of Wednesday 6 p.m., Jeon has a batting average of .343 with 19 home runs and 54 RBIs in 104 games. He is ranked first in batting average among the Giants, and since April, his monthly average hasn’t dropped below .300.

Last season, Jeon said he hoped to hit more home runs. Everything seems to be going to plan - Jeon has hit 25 two-base hits and 19 home runs as of the Giants’ game against the LG Twins in Ulsan on Tuesday. Though the season hasn’t ended, he has already tied his season high record of 19 home runs after Tuesday’s game.

Jeon is one of four Giants to have played in every game this season.

With a better batting eye, Jeon has increased the number of walks compared to last season, from four to six. Not only that, he has also focused on improving his contact, improving his accuracy and home runs.

“I thought it would be hard to have a long career by being good at just one thing,” Jeon said. “My batting average, home runs and on-base percentages have to be good. The studies I’ve done to be a better batter are slowly showing. I’m still working on it.”

Jeon’s improvement this season could be the saving grace for a Giants’ team that has struggled throughout the season. There might be a lot going wrong down at Sajik Baseball Stadium in Busan, but at least Lotte fans know they have the best leadoff in the league.