Jung Hye-lim is ready for last chance at gold

Jung Hye-lim is ready for last chance at gold 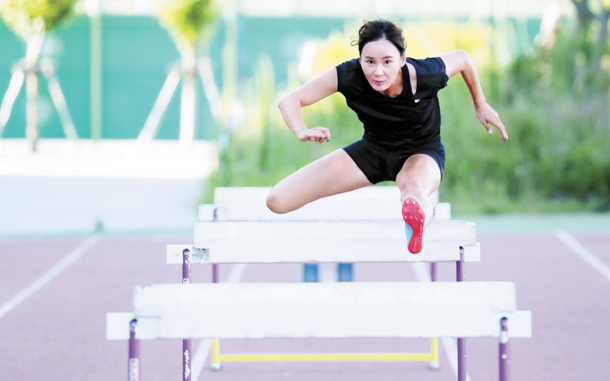 At age 31, Jung Hye-lim hopes to win Korea’s first gold in women’s 100-meter hurdles in eight years, following in the footsteps of Lee Yeon-koung, who took the top prize at the 2010 Asian Games in Guangzhou. 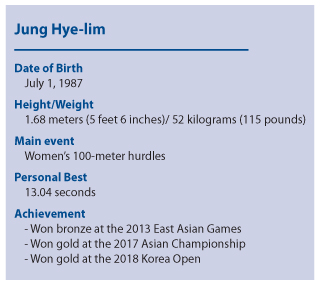 The 100-meter hurdles is a track and field event where 10 hurdles, at a height of 84 centimeters (two feet nine inches), are placed at intervals along a 100-meter track. The first hurdle is placed 13 meters (42.6 feet) from the starting line with the rest placed at 8.5 meters from each other. It requires speed, strength and a good rhythm for a hurdler to smoothly finish the race without tripping over.

When Lee retired from the sport, it seemed almost impossible that her Korean record, at 13.00 seconds, would ever be broken. Throughout her career, Lee won two medals - a gold and a bronze - in the women’s 100-meter hurdles at the Asian Games. She remains the only Korean to have ever won an Asian Games gold in hurdles.

If anyone can tackle Lee’s record, it’s Jung. Over the past three years, Jung has inched closer and closer to the 13-second record.

“I feel thrilled every time I stand at the starting line,” Jung said. “I don’t have any injuries and my condition is great. This is giving me confidence.”

Jung started competing in track events as a middle-distance runner in fifth grade -it wasn’t until middle school that she switched to hurdles.

“[Jumping over] each hurdle feels different,” said Jung. “Other people won’t understand the extra excitement from running over the obstacles. It’s different from just running.”

Jung’s hurdling career hasn’t exactly been filled with glory. She has competed at two Asian Games, failing to medal in both of them. At her first Asiad in 2010, Jung failed to advance out of the heats. In 2014, she finished fourth, just missing out on a podium spot after tripping over two hurdles during the final race.

“I lacked experience and confidence,” Jung said. “I was just vaguely running forward and made a big mistake. Once my race at the Asian Games was done, I packed my stuff and headed right back home. I didn’t even watch the remaining events. I was mad at myself. It was the hardest time in my athletic career.”

It looked like Jung’s career was coming to an unremarkable end in 2016, when she was suddenly given a second chance. After being offered a spot on the Gwangju team, Jung got to train in Japan and was able to make significant improvements.

In addition to her newfound confidence, Jung’s training in Japan also allowed her to find her own tempo and rhythm.

“It is best to slightly brush against the hurdle as I jump over it,” Jung said. “Considering the time I’m in the air, I can only get a good result by keeping my rhythm consistent from the start to the end of the race.”

Prior to her training in Japan, Jung tended to lose speed after the halfway point in her race. Now she has taught herself to add more speed toward the end of the race.

The results are easy to see. At a domestic event in June 2016, Jung came up just short of tying Lee’s Korean record, finishing at 13.04 seconds. Then, at the Kawasaki Seiko Golden Grand Prix in May, Jung set her personal best time of 13.10 seconds at an international event.

On top of a successful 2017 season, Jung won gold in women’s 100-meter hurdles at the 2018 Asian Championship in India with a time of 13.16 seconds earlier this year. She enters the 2018 Asian Games as the second-ranked hurdler in Asia.

To win gold at the Asian Games this year, Jung will have to beat Wu Shuijiao of China, who won gold at the 2014 Games.

“I’ve been called the ‘hurdle princess,’ but now that I’m in my 30s, I want a different nickname,” Jung said. “This will be my last Asian Games. I’ll race like there’s nowhere else to go and become the ‘hurdle queen.’”