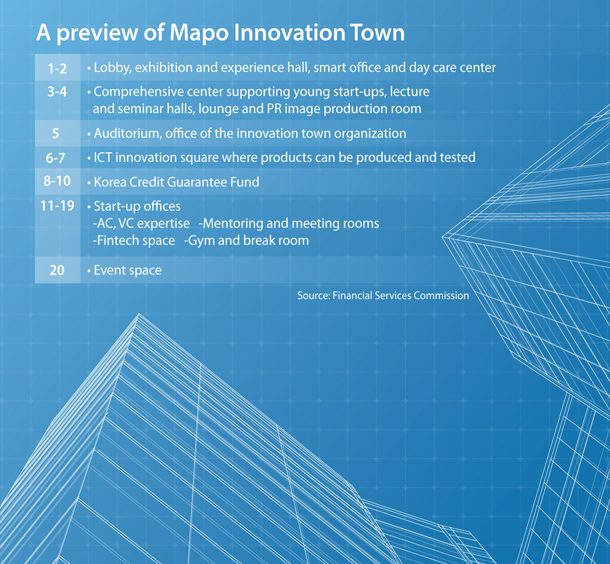 The plan is to foster 300 start-ups over the course of three years once it is completed in May 2020. The start-up space will be open to companies started by entrepreneurs younger than 40 years old who started their companies less than 7 years ago.

Mapo Innovation Town, which will be housed at the Korea Credit Guarantee Fund building, aims to cater to businesses offering a variety of services, from business consulting and fintech to virtual reality.

The building will have a total floor area of 36,259 square meters (8.9 acres), equivalent to Europe’s biggest start-up campus, Station F in Paris.

The government’s plan is to create a triangular innovation cluster in western Seoul by connecting the Mapo complex, which will be near Gongdeok Station, with nearby universities, including Yonsei University and Sogang University as well as well as financial companies in Yeouido.

It also hopes to create a larger ecosystem by integrating with IT clusters on Gangnam’s Teheran-ro and in Gyeonggi’s Pangyo Technology Valley.

Mapo Innovation Town will partially open in the fourth quarter of next year, and is scheduled to fully open in May 2020.

“The center will support start-ups from young people using fourth industrial revolution core technologies, such as fintech, artificial intelligence and blockchain,” said Sohn Joo-hyung, and official at the financial industry bureau of the FSC.

According to the Ministry of SMEs and Startups, in the first half of this year, the number of new companies increased 6.8 percent from a year ago to hit 52,790, an all-time record.

“Demands for spaces that could support start-ups has grown,” the government report said.

It also noted that there was a significant shortage of affordable spaces for start-ups.