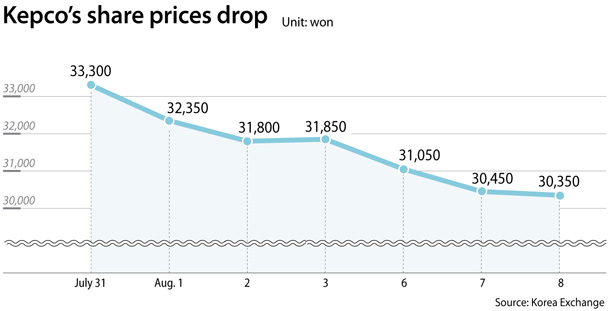 This week couldn’t have been any worse for the Korea Electric Power Corporation (Kepco), the country’s state-run utility firm, as multiple unforeseen events slammed the company’s market value.

According to data from the Korea Exchange, Kepco, which is listed on the country’s main Kospi bourse, closed Wednesday at 30,350 won ($27.11), down 0.33 percent from the previous trading session.

From July 31 to Wednesday, Kepco’s share price tumbled by nearly 10 percent to reach its lowest level in four years and eight months.

The latest trouble for Kepco, which has a monopoly over Korea’s electricity supply, came on Wednesday.

The government announced that it would provide discounts of as much as 19.5 percent on household electricity bills for July and August.

The government’s generous offer is likely to be given at the expense of the energy company, so Kepco may end up bearing all of the costs of the discounts, which the Ministry of Trade, Industry and Energy estimated at 276 billion won.

Paik Un-gyu, the energy minister, said that, while Kepco may have to bear the burden at first, the government will try to compensate the company later.

“The government says it is considering support measures for Kepco by utilizing options such as ‘disaster relief fund,’ but [the discount] will still have a negative effect on the company’s performance,” said Yoo Jae-seon, an analyst at Hana Financial Investment.

The costs will be reflected on Kepco’s third-quarter report. The company was hoping to get into the black this quarter after struggling recently.

Kepco suffered operating losses of over 100 billion won for two straight quarters from September to March this year, a drastic change from the previous quarter, when the company posted 2.7 trillion won in operating profit.

The two consecutive quarters of operating losses are mostly due to the suspension of operations for maintenance at Kepco’s nuclear reactors, the company explained.

Although Kepco has not yet announced its second-quarter performance, local securities firms predict that the power company will post operating losses of up to 580 billion won.

“At this point, it’s now difficult to make a prediction about its performance [for the third quarter],” said Shin Ji-yoon, an analyst from KTB Investment & Securities. “There could be a huge disparity between the costs that Kepco will actually end up bearing and the 276 billion won suggested by the government.”

But a government decision that could cost Kepco billions of won isn’t the worst thing to happen to the power company this week.

Kepco’s calamitous past week started on July 31, when the Financial Times reported that the company has its lost preferred bidder status for NuGen, a unit of Japanese conglomerate Toshiba in charge of building the Moorside nuclear power plant project in Cumbria, Britain.

The Energy Ministry held a briefing the next day to explain that while Kepco lost the position of preferred bidder, the Japanese group is still favoring the firm for the purchase of NuGen.

Investors didn’t buy the explanation, and Kepco’s share price retreated by about three percent from July 31 to Aug. 1.

Experts say that exporting its nuclear technology is crucial for Kepco to stay afloat, as the Moon Jae-in administration is pushing for a domestic nuclear phase-out plan.

To make matters worse, Korea South-East Power (Koen), a subsidiary of Kepco, is under fire over suspicion that it imported nearly 10,000 tons of coal from North Korea in violation of international sanctions.