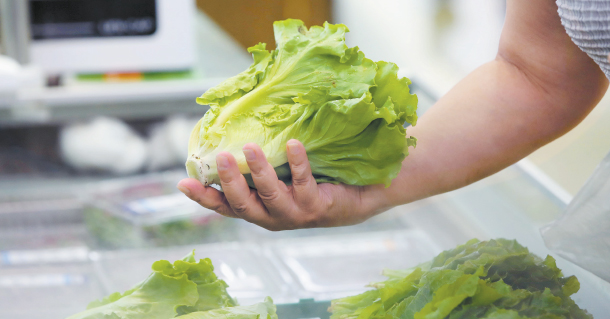 The price of vegetables rose by over five percent between July 27 and Aug. 3 as Korea continues to suffer from a sustained heat wave. The price of processed seafood products also rose by 7 percent during the same period and the price of fish increased by 2.4 percent. [YONHAP]

The price of vegetables in Korea rose by over five percent in just a span of a week as temperatures hit record highs across the country. 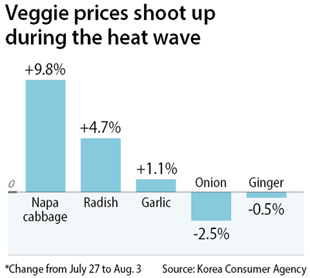 According to data from the Korea Consumer Agency, the average price of fresh produce increased by 5.17 percent from July 27 to Aug. 3.

The price of napa cabbage jumped 9.8 percent in a span of a week. Radish prices increased by 4.7 percent and garlic jumped by 1.1 percent, the data showed.

The authorities explained that this is a result of the record-breaking heat during the week.

On Aug. 2, temperatures in Seoul hit 39.6 degrees Celsius (103.3 degrees Fahrenheit), breaking the previous record set for the city in 1994. In Hongcheon County, Gangwon, the mercury hit 41 degrees Celsius, the highest temperature ever recorded in Korea.

“The ministry is giving 4.8 billion won to regional governments to distribute to farms that grow produce that will be in high demand, such as napa cabbage and radish,” said an official from the Ministry of Agriculture, Food and Rural Affairs.

The ministry already spent about 3 billion won ($2.6 million) at the end of July, but decided to spend additional money to cover the additional costs farmers are incurring due to the prolonged heat wave and drought.

“Lack of water is a major problem for farmers,” said the official from the Agriculture Ministry, who explained that the recent brief rainfall wasn’t enough to quench crops’ thirst.

“Nearly all the ginger that I grew dried out,” said Song Kyung-hee, a 58-year-old farmer from Yeongju, North Gyeongsang. “We sprayed water more regularly, but it has done no good for the crops.”

Due to scarce supplies, farmers such as Song have seen the cost of providing crops with additional water jump by as much as four times, driving up the prices of vegetables.

The situation has taken an especially heavy toll on farmers who raise crops such as napa cabbage high in the mountains of Gangwon, the Agriculture Ministry official added.

With the drought likely to continue for the next two weeks, crops such as ginger, which saw its price fall last week, are likely to become short in supply, which will end up pushing up prices.

The skyrocketing price of vegetables will come as a burden for average households, with the Chuseok fall harvest holiday and kimjang, Korea’s kimchi-making season, around the corner. Napa cabbage, radish, garlic and ginger are all key ingredients for kimchi. The Chuseok holiday will fall during the last week of September this year.

The Agriculture Ministry explained that livestock are also continuing to suffer from the heat. As of Monday, 4.5 million animals have died this year due to the heat, over 50 percent more than 2017.