A new perspective on crime drama: After the success of the first season, ‘Voice 2’ promises more thrills

A new perspective on crime drama: After the success of the first season, ‘Voice 2’ promises more thrills 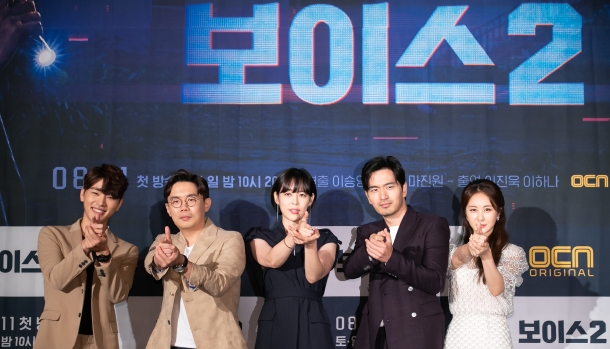 The brief, yet crucial, period following a traumatic injury when a medical treatment can prevent a death is known in the world of medicine as the golden time. Those precious minutes drive the drama in the second season of the hit OCN series “The Voice.”

Ending with a viewership rate of 5.7 percent, the first season of the show set new records for OCN and ranked first among cable TV dramas for consecutive weeks. The first episode of the second season will air on Saturday night.

Written by Ma Jin-won, this crime thriller picks up where the previous season left off. The show tells the stories of the Golden Time Team, a special task force made up of police call center workers, crime specialists and detectives.

Although Korea has a low crime rate compared to other Organization for Economic Cooperation and Development member countries, over the past 30 years, crime in Korea has doubled, according to Statistics Korea. From 2000 to 2016, while crimes such as robbery and murder have decreased, sexual assault has increased 3.9 times and assault has increased 9.4 times.

This season, the drama will tell the story of a psychic, a priest and a detective desperately chasing after a mysterious group behind a series of crimes. Along with exorcism and shamanism, “Voice 2,” directed by Lee Seung-yeong, will feature new cases each episode. Once again, the character work with the slogan “leave for the crime scene within three minutes, arrive there in five and arrest the criminal in 10.”

Although “Voice 2” continues the main story of the previous season, it is slightly different in terms of plot and characters.

While familiar faces such as actors Lee Ha-na, who plays voice profiler Gang Gwon-ju, and Son Eun-seo, who plays foreign language communication expert Park Eun-su, have returned this season, new actors, such as Lee Jin-wook and Kim Jae-wook, have joined the cast. 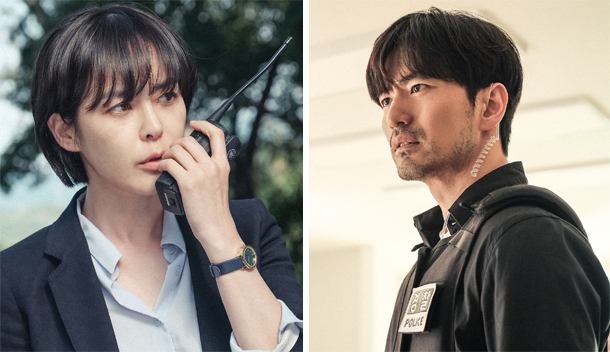 Lee Ha-na, left, plays a skilled voice profiler while Lee Jin-wook, right, plays a detective who can interpret a crime scene from the perspective of a criminal. [OCN]

Due to personal reasons, actor Jang Hyuk, who played the role of Mu Jin-hyuk, a detective with a rough yet down-to-earth personality, was unable to join this season.

Therefore, a new character, Do Gang-u, played by Lee Jin-wook, was created. He is a detective who possesses the ability to interpret a crime scene from the perspective of the killer.

“Many people thought that I would feel burdened by last season’s high ratings,” said Lee. “Instead, I feel the opposite, because I believe that this will positively influence the viewership rate for this season.”

When asked about how Do was different from Jang Hyuk’s character, Lee responded that it’s all in the characters’ personalities.

“Well, while Jang Hyuk’s character is a tough detective who has many action scenes, my character, Gang-u, is more like a sharp blade,” said Lee.

“I really liked that Gang-u examines the crime scene from the viewpoint of a criminal. Gang-u is an interesting character since he experiences inner conflict being a detective and not a criminal.”

“The screenwriter has already planned out [the script for] season three,” said director Lee at a press conference on Tuesday prior to the drama’s premiere.

“It may seem that the number of episodes has decreased for this season, but that’s not the case. Since season three will air right after season two, I [intentionally] planned it this way so that season three can pick up right where season two ends.

“What’s unique about season two is that the antagonist will be the most evil villain [that appeared on the series,]” said director Lee, hinting that the crimes committed by the antagonist are intriguing and gruesome.

“While there was just one villain in season one, this season features a force of villains.”