Local eateries fueled by eliminating waste: Being environmentally friendly is a part of the ethos of Seoul cafes where customers are encouraged to recycle

Local eateries fueled by eliminating waste: Being environmentally friendly is a part of the ethos of Seoul cafes where customers are encouraged to recycle 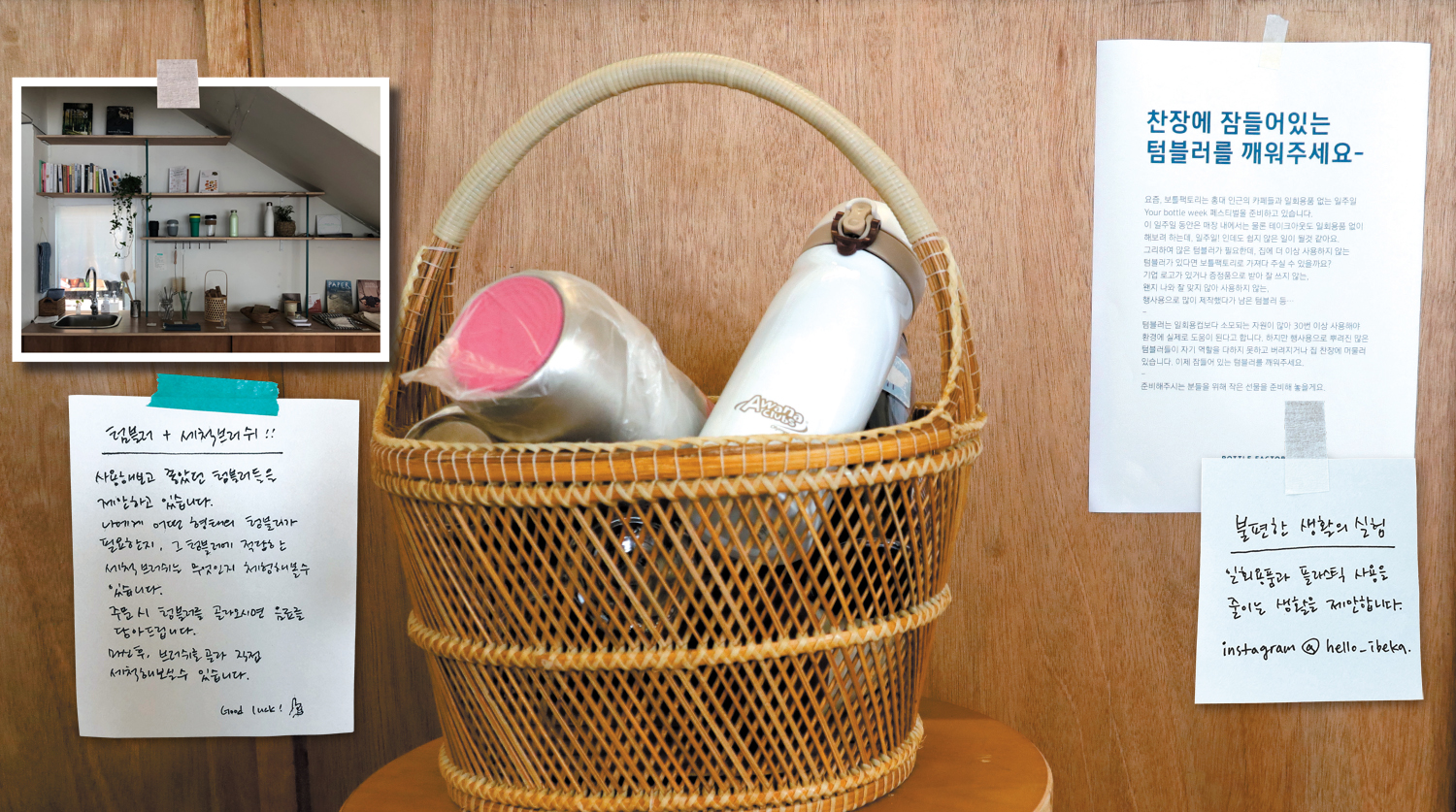 Bottle Factory collects tumblers from across Korea for “Your Bottle Week,” an event where customers ordering take-out drinks will get reusable tumblers. The cafe has a sink, pictured left, for customer’s use if they wish to clean their own cup or tumbler. The cafe has notes taped on walls explaining their efforts to eliminate waste. [LEE SUN-MIN]

A little inconvenience isn’t getting in the way of consumers looking for options to make their daily routine a little more environmentally-friendly, in accordance with the government’s ban on the use of plastic or disposable containers at cafes and restaurants for customers eating in, which began this month.

Beyond just getting their drinks of choice in reusable cups, some are dropping other disposable items like paper napkins and replacing them with washable cloth. Plastic straws are on their way to getting removed from shelves as well, and straws made out of colored paper, bamboo or stainless steel, which are often used for special cocktails or juices in order to make the drinks more charming, are getting more attention.

Some cafes in Seoul that have sprung up in the past two years offer ways to cut down on the use of disposable items and have seen an uptick in the number of “understanding” customers. While it was difficult at first for these cafes to explain why they did not have disposable cups for take-outs, these days more people are open about staying inside the cafe for a quick drink or bringing their own cups and containers if they need to take their drink out with them.

“More people are getting their hands on alternative items as many start to talk more about problems regarding waste,” said Song Kyoung-ho, co-owner of cafe The Picker in Seongsu-dong, eastern Seoul.

Tumblers received as a freebie from company events or that are only used for picnics are usually stored somewhere in people’s cabinets at home collecting dust.

Bottle Factory, a cafe in Yeonhui-dong, located in western Seoul’s Seodaemun District, is asking people to share their unused tumblers that have been taking up space in their homes. The cafe is organizing “Your Bottle Week” during the third week of September, during which cafes will provide take-out drinks in tumblers in order to encourage customers to carry their own bottles and minimize their use of take-out plastic cups and straws. Currently, five other cafes nearby have agreed to participate in “Your Bottle Week” together with Bottle Factory, which doesn’t offer a take-out option at the moment. The cafe plans to make their own reusable take-out tumblers for customers to use whenever they want.

“Boxes have been arriving to the cafes every day, and some are coming all the way from Geoje Island in South Gyeongsang,” said Chung Da-woon, co-owner of the cafe, who received a box of tumblers during an interview with the Korea JoongAng Daily.

“I’m trying to answer a question I had two years ago, whether take-out plastic cups are really necessary, and I hope to make ‘Bottle Week’ an annual event.”

The cafe opened about three months ago and is run by owners who are focused on minimizing waste. While preparing to open the cafe, Chung even followed waste collecting trucks and waste processing plants in Korea to track down whether the recyclable plastics they collected were really being turned into something that could be used again. From there she learned that plastics are rarely made into new products and the way to protect the environment more is to just cut down on the waste.

At Bottle Factory, there are different types of reusable straws available, and the cafe doesn’t print paper receipts unless customers ask for it. It has a sink on one side of the cafe where customers can wash their cups and tumblers, and outside the cafe there is another washing area that neighbors walking by can use to clean their cups.

“We want to show customers that there are ways to use more reusable items and we want them to be the ones questioning and challenging cafes that use disposable items so that other cafe owners can also change. They will change when consumers ask them to change.”

The shelves at The Picker, a cafe in Seongdong District, eastern Seoul, where customers are encouraged to bring their plates and cups to enjoy the cafe’s food and drinks. Stainless steel straws are provided with its drinks, as pictured at left. 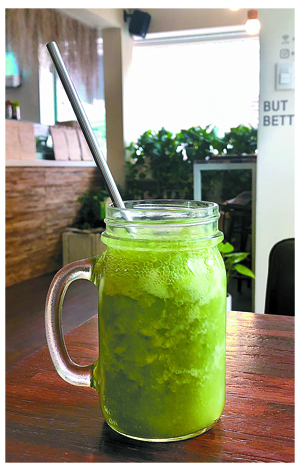 One neighborhood at a time

The motto of The Picker in Seongsu is the word “precycling.” It aims to take action in advance so that there won’t be any waste to worry about. Here, the cafe not only takes drink orders but also sells different types of grains and beans such as quinoa or chick peas, and customers either need to bring their own containers to carry them, or buy a reusable bag, as it also functions as a grocery store for nearby residents.

The nearly two-year-old cafe is located in the residential neighborhood in Seongsu-dong, steps away from Seoul Forest. Although the area is now known as a commercial area with many cafes, many locals who live around the area come by the shop to pick up vegetables, fruits and grains, or to grab lunch and dinner.

“Residents nearby bring their plates and cups to take our food out with,” said Song of The Picker, where a 500 won discount is given to people who bring their own containers when they order food and drinks.

“Being part of an already existing neighborhood was our big goal - to see how people can slowly adapt to a new style of consumption - and although many were unfamiliar with the concept of minimizing waste in the beginning, they have been getting used to it after some time.”

Some even have fun using more environmentally-friendly items like bamboo straws, remarking that it reminds them of enjoying a drink at a beach overseas. Although many people feel awkward using stainless steel straws, over time some say that they have gotten used to them and don’t mind washing their straws after they are done drinking. The cafe and grocery store also offer plates made out of coconut in an attempt to save trees from being cut down.

Earth Us, another cafe in western Seoul’s Mapo District, also takes a similar approach to minimizing the use of disposable items. It has paper cloths folded and ready to replace the paper napkins people often use at cafes. It also offers any take-out unless customers bring their own bottles to take drinks with them.

With more media outlets reporting on the government’s effort to minimize the use of disposable items as well as cafes trying to cut down on waste, more consumers are getting ready to carry their own cups and bottles wherever they go.

Retailers have said that the sales of portable tumblers have gone up in the past few weeks. Lotte Mart saw a 0.3 percent drop in the sales of disposable items overall, while its sales of tumblers went up by 5.2 percent in July, compared to the same month last year. Sales of water bottles also increased by 4 percent, showing that many are warming up to changing their habits to minimize waste.