A tale of two site visits

A tale of two site visits

CHOI JI-YOUNG
The author is an industry news reporter of the JoongAng Ilbo. 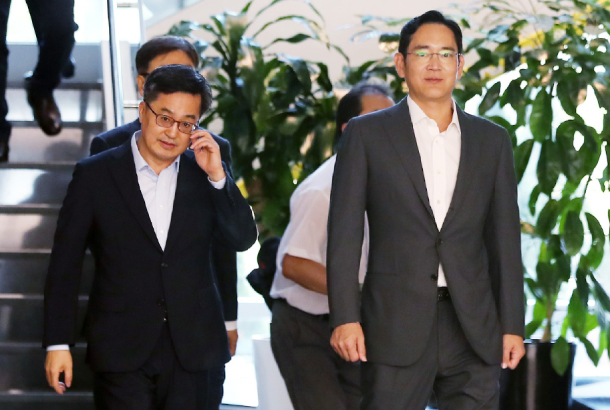 “Glad to visit Apple HQ with Tim Cook. Thank you for your commitment to invest 350B in USA! #TaxCutsJobsAct,” U.S. Treasury Secretary Steven Mnuchin tweeted on March 16 after visiting the Apple headquarters in Cupertino, CA. He also tweeted a photo with the Apple CEO. The media only learned of Mnuchin’s visit after reading his tweet. Apple’s ＄350 billion investment was not decided in the meeting with Secretary Mnuchin. It was a move in response to the Trump administration’s tax cut introduced in January. Apple announced it two months ago.

I am curious about how these situations play out in other countries after Deputy Prime Minister for Economy Kim Dong-yeon met with Samsung Electronics Vice Chairman Lee Jae-yong. It is rather childish to directly compare, but it is hard to find other meetings as spotlighted as the Kim-Lee meeting. Mnuchin visits companies and meets with CEOs often. He also accompanies U.S. President Donald Trump’s visits to company sites as the head of the economic department. But these visits don’t garner much attention and have no formalities. Mnuchin’s Apple visit is a classic case.

The ＄350 billion investment in the United States planned regardless of Mnuchin’s visit was a substantial change for Apple, which has been criticized for being stingy in creating jobs and making investments in the United States. Apple decided to bring in ＄240 billion in cash, which is probably most of the cash that Apple has accumulated abroad. It is true that Trump nudged Apply, but it seems that the temporary measure to impose a low 15.5 percent tax on overseas cash was more critical. American analysts predict that Apple has about ＄200 billion in cash after taxes, and is likely to use it on enhancing its competitiveness through mergers and acquisitions.

Samsung Electronics planned to announce an extensive investment and hiring plan but failed to deliver on Aug. 6. It is uncertain how much Samsung has actually planned. It is also unclear whether the company’s plan will actually help the economy.

Kim nevertheless visited Samsung because he wanted to give a signal internally and externally that reviving the economy is an urgent task. In an OECD survey, Korean companies alone were pessimistic about the future market among 25 member countries. It would have been nice if substantial deregulation was implemented before the meeting, but it happened first. Now, companies expect policies that will actually help business.